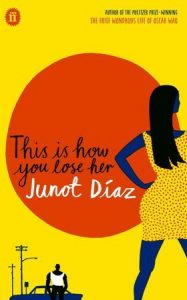 I must admit that had I noticed that This is How You Lose Her was described as a «collection of stories» rather than a novel, I would probably have left it on the book-sharing table at the bookblogger meetup. And I would probably not have started it now, even if I hadn’t left it. But I did. And since I brought it along to read on my way to London – the only book I brought, seeing as I knew I’d be purchasing books enough once there – I decided to stick to it in any case. The book was finished on the tube from Heathrow, so the timing was pretty good, though I must admit that I pushed through the last half knowing that if I didn’t finish before aqcuiring new reads I would probably have to log it as dnf.

So. A collection of stories, they say. And so it is. However, I found it a weird collection. At least four of the stories are about the same family (or at least uses the same names, the narrator, Yunior and Rafa – his elder brother – and the same basic plot), which ought to please me, I guess, since my main gripe with short-stories is that I don’t get to know enough about the characters. However, I’m not so sure I wanted to know quite so much about these characters, so that’s a hitch. On the other hand, the story I liked best (and which I would recommend, despite the coming gripe), Otravida, otravez,  ended a bit too abruptly for me. I want to know what happened next! And yes, I can quite see why the author would leave it open-ended, but I still want to know.

On the whole there are positive things to say about the book. Some of the insights into the plight of immigrants are both poignant and illuminating (to those of us privileged enough to not have been in that situation for generations). The language is frequently quoteworthy. The casual sex and infidelity, though, that just gets too repetitive for me. And some of the stories are written in second person narrative (echoing the «you» in the title) and I may have mentioned before that I HATE second person narrative? It may be meant to connect the reader to the story, for me it does the complete opposite. In the end, as mentioned, I finished mostly out of defiance (and lack of other reading options) and gave it a lukewarm two stars on Goodreads. Still, it had its moments, and I’ll end with a quote from the story I most recommend, Otravida, otravez, page 66:

Ana Iris once asked me if I loved him and I told her about the lights in my old home in the capital, how they flickered and you never knew if they would go out or not. You put down your things and you waited and couldn’t do anything really until the lights decided. This, I told her, is how I feel.

I left the book in a phone booth by Christchurch Gardens in London, if it gets logged its journey can be followed on Bookcrossing.

2 thoughts to “This is How You Lose Her – Junot Díaz”