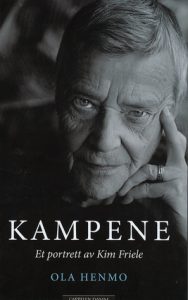 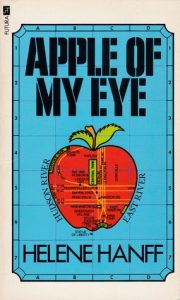 After rereading 84 Charing Cross Road and the rest of the Hanff books I owned my next step was to hit Abebooks and order the ones I could find that I didn’t already own (as well as a better copy of 84). Consequently, I read Letter from New York for the first time before Christmas and my first read of this year (not counting the fifty-odd pages I had left of The Skies of Pern at midnight New Years Eve) was Apple of My Eye.

Both books are about New York, Hanff’s adopted city. Of the two, I much prefer the latter. Though I gave them both three stars out of five, Letter from New York is borderline from two, whereas for Apple of My Eye I considered a four. The main difference is perhaps that whereas the first is a collection of columns written for Woman’s Hour and thus has no cohesive plotline (if plotline is the right word for a non-fiction book), Apple of My Eye certainly does. It’s a matter of taste entirely, but an overarching story just suits me better.

That overarching story is that Hanff has been hired to write copy for a book of photographs of New York meant for tourists. Easy, right, it’s her home after all? Well. as with so many of us, it turns out she hasn’t necessarily visited the tourist attractions. So she sets out to visit them, with her friend Patsy. Initially Patsy is just going to join her for the trip to the Statue of Liberty, but she eventually tags along for the whole thing, spread out over a couple of months. The only big question I’m left with is «what happened to the photographs»? Because this book doesn’t have any, and the text as is wouldn’t work as copy for a book of photos anyway. An afterword explaining whether there ever was a book of photographs and how this book came to be would have been nice, but it’s a minor thing.

If I ever get around to visiting New York – which IS on my bucket list, but not very near the top – I’m going to bring this book and try to copy some of Hanff’s outings. Not all of them can be copied, though. It was a weird experience reading the chapter where they visit the World Trade Center, and all the other mentions of the centre or the twin towers in the book. I mean, with the hindsight of twenty-years-since-9/11, doesn’t reading this make you… I don’t know… uncomfortable?

Throughout its construction, the World Trade Center was cordially detested by all New Yorkers. The unpopular Rockefeller brothers were so closely involved in the financing that for a while the twin towers were known as Nelson and David; the giant buildings are owned by the even more unpopular Port Authority, which wasn’t created to build and own huge office towers. Plus which, the financially desperate city didn’t need two new 110-story office buildings and couldn’t afford to supply them with services. (Page 29.)

All said, though, it was a pleasant read, making me think more seriously about actually visiting New York than I have in years (at least since 2016, when I vowed to stay out of the USA until the orange guy was out of office, and probably since 9/11 and «The War on Terror»).

A funny side note: My copy has a newspaper clipping pasted into the back of it (appropriate, what with all the clippings Patsy comes up with throughout the book), which includes a portrait of Helene Hanff. I don’t think I’ve ever seen an actual picture of her before. Anyway, I was for some moments confused because she didn’t look anything like Anne Bancroft. Duh. 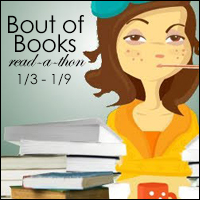 It’s a good way to kick off the reading year.

Not much reading, but on the upside a two-hour meeting with my book club over Teams. 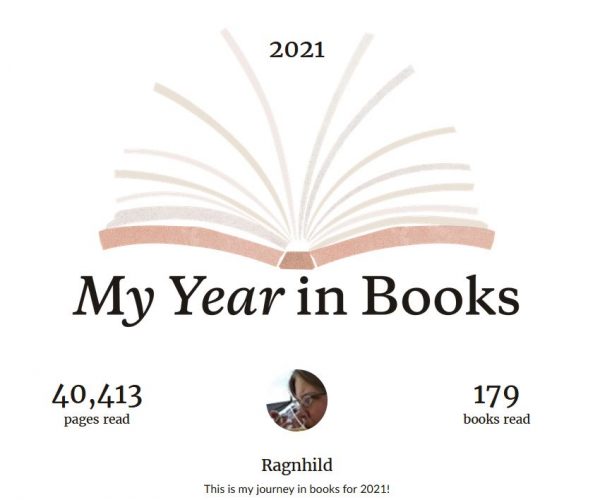 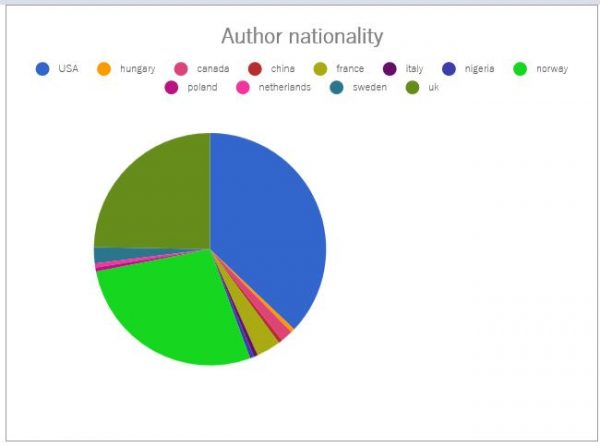 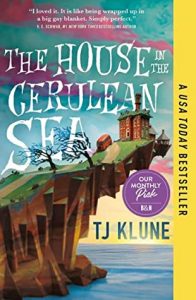 I borrowed The House in the Cerulean Sea from the library, thinking I could always purchase it later. TL;DR: I won’t.

I apologise on beforehand, but this review is going to be a bit shouty.

I was unsure whether I would even finish the book until about three quarters of the way though, and even then it was more a case of «well, I’ve come this far» than of «I really need to know what happens!» But I did finish, I even cried a bit at the end (granted, it doesn’t take much). And I was left with a «Well, that was a rather mediocre experience, really, I’ll probably go with three stars on Goodreads.» Then I went on Goodreads and read some reviews of the book and dicovered how Klune came up with the idea for the book and my rating dropped. But let’s start with my initial reaction, taking the book at face value:

It’s definitely overly saccarine. I could overlook that, probably, found family is my absolutely favorite trope (which I admit is odd, since I actually come from a suprisingly functional family). I mean, who doesn’t love unwanted, misunderstood children finally finding a loving family?

And gay romance is a plus, even if I had a hard time actually believing in the romance (I can see what Linus sees in Arthur, the other way around: Not so much. And all his «you dear man»s dont’ convince me. However).

The «moral» of the book it’s hard to disagree with: Prejudices are bad and just because you’re different you are still worthy of love and respect. Or thereabouts. Though it is perhaps hammered home a bit too obviously (with a sugar-coated mallet). More «tell» than «show».

The fat-shaming we could have done without, also.

But the main problem is that there are too many things that don’t make sense about the society – or world – the book is set in.

The children are orphans? Lucy’s father is the Devil, for crying out loud. Are you saying the Devil was real, but now he’s dead? Are all magical children orphans? Why? And if not, what happens to those that have parents? Are they allowed to stay with them, or are there forced separations? Why are they called orphanages if some of the children have living parents? The term «orphanage» is made a point of in the book, Arthur says it’s a misnomer as «people don’t come here looking to adopt», but surely that’s not a fundamental characteristic of an orphanage? I thought an orphanage was a place where orphans lived (and Merriam-Webster agrees with me). Which they do. If they are orphans. So: Are they?

The scene where Linus first meets Extremely Upper Management (and the name «Extremely Upper Management», and, well, really, the whole setup of DICOMY, including his supervisor Mrs. Jenkins) is basically a mix of Kafka’s The Process and the hearings of the Wizengamot at their worst. Including absurd, villainesque effects like the room being dark and lights being turned on in dramatically choreographed sequence. But then, when Linus returns from the island with his recommendation that the orphanage stay open, this menacing, bureaucratic beast goes: «Ok.» And everyone lived happily ever after. WHICH IS NOT HOW THINGS WORK. And THEN he turns whistleblower and the existing management has to resign. Which makes even less sense.

And now we get to the crux of the matter: None of it makes sense in the world Klune has built, but it becomes plainly offensive when you learn that his inspiration for the book came from Canadian residential schools.

Here’s what Klune has said about it: «It remained fuzzy until I stumbled across the Sixties Scoop, something I’d never heard of before, something I’d never been taught in school (I’m American, by the way). In Canada, beginning in the 1950s and continuing through the 1980s, indigenous children were taken from their homes and families and placed into government-sanctioned facilities, such as residential schools. The goal was for primarily white, middle-class families across Canada, the US, and even Europe—to adopt these children. It’s estimated that over 20,000 indigenous children were taken, and it wasn’t until 2017 that the families of those affected reached a financial settlement with the Canadian government totaling over eight hundred million dollars.»

I’m sure if someone had turned up to one of these «schools» in the sixties and said «Uh, I don’t think you ought to kidnap, beat, starve and kill these children, actually,» the system would have been dissolved at once and everyone would have gone on to live long, prosperous, non-traumatised lives. OR NOT.

And these fictional children, that are orphans, apparently, but are based on real life indigenous children who were removed from their families and communities in state-sanctioned-kidnappings… When the book ends, they are still living in the orphanage. And I admit that in the story this sort of makes sense, especially since they are supposedly orphans, but a better, happier ending would surely have been to reunite these children with their families and communities?

So, no. I will not be needing a physical copy of this book. I will be quite happy to hand it back to the library. 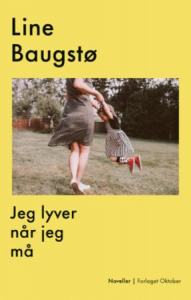 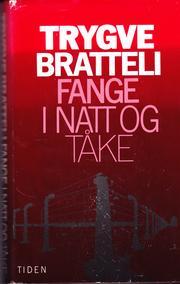 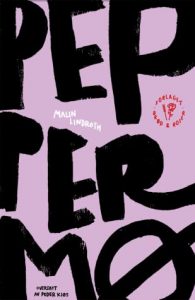