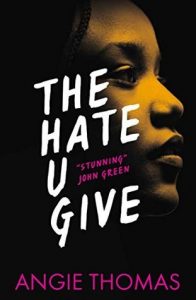 I’ve read so many rave reviews of Angie Thomas’ The Hate U Give, both on blogs, Instagram and Twitter, that I was fully expecting to be disappointed. Instead I can proclaim that I will happily jump on this bandwagon and recommend THUG to EVERYONE and their grandma.

Angie Thomas manages to create a set of utterly believable, and mostly loveable, characters. It’s a sad fact that young (and old) black americans are killed by police in way more frequently than there is any possible justification for, and though Thomas does not provide any quick fixes or fantasy happy endings, she provides valuable (especially to white people like me) insight into how it feels to be on the receiving end of racial profiling and the story ends on a hopeful note.

It’s also worth noting that though Thomas writes specifically about the experience of being black in the USA in the here and now, a lot of what Starr experiences and feels is relatable and timeless. The feeling that she has to be two different people in her own neighbourhood and at her «posh» school, for example:

I can’t stand myself for doing it, but I do it anyway.

(Page 73-74.) It’s a familiar theme for anyone who has experienced – or read about – class journeys.

And while the political side of the story is inevitably difficult to ignore, The Hate U Give is also a lovely story about being sixteen, dealing with siblings and parents, friendships and romance.

The Hate U Give is being adapted for the screen and is set to be released in October. For once, I think I might actually have to go to the cinema (for something other than a kids’ movie).