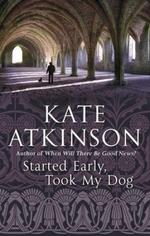 Having gotten my hands on Started Early, Took My Dog, I obviously had to start it as soon as possible.

Jackson Brodie gets himself mixed up, yet again, with a lot more old history than he had bargained for. This time missing children is the variation of the recurring theme. A far cry from archetypal crime, Atkinson is firmly rooted in tradition, but runs circles round most of her fellow crime writers.

For one thing, she produces passages such as this: «Schrödinger, whoever he was, and his cat, and anyone else that felt like it, had all clambered inside Pandora’s box and were dining on a can of worms. Jackson felt the beginnings of a headache, another one, on top of the one he already had.»

I’m already waiting for her next book.

That’s what we had last weekend. And, obviously, a few books came home with us.

From the Oxfam Bookshop:

From an outdoor book market:

From Pocketshop at Arlanda on the way back:

I was surprised to discover a book by Kate Atkinson that I hadn’t heard of before and promptly ordered it from Amazon. When it arrived I realised why I hadn’t heard of it, it’s a play. I had no idea Atkinson wrote plays, but since I rather enjoy reading playscripts it did not put me off (rather the opposite). Abandonment is an interesting little tale and can be recommended.

Case Histories is a kind of crime novel. At least there is a private investigator and a few mysteries needing to be solved. That makes it a crime novel, right? As usual, Atkinson is hard to classify (this is one of the reasons I like her work), and as usual it’s difficult to put the book down (and difficult to adjust to «reality» when you do).

In which we exclaim: So short, so short!

I’m not a big fan of short stories in general, but I have just devoured Kate Atkinson’s Not the End of the World, despite thinking after the first couple of stories that «This is the sort of book to dip into, it’s far too rich to do justice to all of it at once.» Well, perhaps I did not do justice to it. I suspect I will have to reread it at some point.

Though they stand perfectly well on their own feet, the stories intertwine, and so to some extent I suppose there is something to be said for reading the whole thing as a book rather than one story at a time. The richness comes from the balance – or, at times, deliberate confusion – between what we would normally recognise as reality and something else, something not quite defined, or indeed, definable. It’s rather refreshing to see an author so cheerfully ignoring the rules of probability and realism within the confines of «contemporary fiction» rather than the genre-specific conventions of «fantasy», for example.