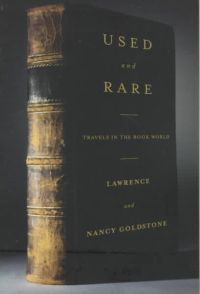 I don’t know what prompted me to want to reread Used and Rare (again), but Västmanländskans challenge to read books-about-books in preparation for World Book Day pushed me to actually take it down.

As I’ve only ever blogged about this book on the occasion of another reread, my comment was rather short, and I think it deserves better, as it really is an excellent book.

We follow the authors through their discovery of book-collecting – as in buying specific editions of books rather than just amassing reading copies. The whole «adventure» starts because they challenge each other to spend no more than 20 dollars on birthday presents. One of them decides to get the other a nice hardback copy of War and Peace, which turns out to be pretty impossible without hitting the used book stores. The successful hunt for War and Peace make them realise they can get nicer, more readable copies of books they want to own used than new, and they set out to replace some of their paperbacks with hardbacks. However, and this is eerily familiar, with books – when you’re a bit of a bibliophile – one thing tends to lead to another. The first major hurdle is reachen when they find a copy of Orwell’s 1984:

We took the book off the shelf and opened the cover. «1st US,» it read. «$100.»
We looked it over. It seemed to be in excellent condition.
«Don’t we have this?»
«I don’t think so. Maybe in paperback.»
«Maybe.» We were fondling the book now. «Too bad. This is a great book. You’ve read it, haven’t you?»
«In high school.»
«You should read it again. You can’t appreciate it in high school.»
«It’s a hundred dollars.»
«I know. We can’t buy a hundred-dollar book. It’s out of the question. Let’s just put it back.»
«Right.» The book had not left our hands.
«Too bad. It’s a great book. It’s probably a good deal. Orwell certainly won’t drop in value.»
«No, Orwell won’t.»
«That’s the good thing about firsts. You know they won’t drop in value.»
«That’s true.» As if we had any idea at all of what we were talking about.
«That means that if we wait it will only go up in value.»
«So we’re probably actually saving money if we buy it now.»

On the following page, they take their purchases to the desk, and the owner starts noting down the prices:

He stopped and looked up. «What exactly do you collect?» he asked.

Up until that moment, we had never felt like we «collected» anything. We were just two people who bought used books.

«Uh, we only buy books we like to read.»

One of the reasons I like this book is, I suppose, that my own book-collecting started in much the same way. I remember trying to get hold of The Colour Purple in hardback and realising the only way I could do that was by buying it second-hand. This was way back when, the internet barely existed (Mosaic – a browser showing pictures inline – was hot news), and Norwegian used book stores are not exactly noted for their excellent selection of books in English. I had to settle for The Colour Purple in paperback – I needed it for a course – but over the next few years I increasingly tried to find used hardbacks of books I wanted to own (which, to be honest, was pretty much every book I needed to read).

So the Goldstone’s journey into the bookworld is familiar (though I envy them their local selection of bookshops). The book also serves as a bit of a primer (though not in the dry language of most primers) on book collecting terms and common mistakes. If you’re new to the game you can learn along with the authors, and even if you’re not you’re likely to learn something new.

I also like the way the story is told in the plural «we». It is only very occasionally possible to tell whether it is Lawrence or Nancy speaking, as in the dialogue above.

And when you’ve read 84 Charing Cross Road, what is more natural than to polish off Used and Rare, Slightly Chipped and Warmly Inscribed in quick succession?

I see from the archives that I must have neglected to record my first reading of Warmly Inscribed, which is annoying, but most of what I said for the first two hold true for this one as well – the difference, if there is one, is that larger sections of the book are dedicated to single «stories», such as that of the New England forger of the sub-title. This is in no way a bad thing, and like the two first, Warmly Inscribed is a bit of a must-read for any bibliophile.

I suddenly got the urge to read some books-about-books, and so I reread Used and Rare and Slightly Chipped by Lawrence and Nancy Goldstone. One reviewer called the first book «A Year in Provence for book-collectors», which is not far off. The Goldstone’s become book collectors (as in people who buy specific editions of books rather than people who own lots of paperbacks) by accident, so to say, and the two books chronicle their initiation into this strange new world. Now, to me, of course, pretty much everything to do with books holds a fascination that will make me suffer through even the driest language. However, with the Goldstones we are spared that predicament, as the prose carries you along in the most admirable manner. If you are a beginner at the book-collecting game yourself you can learn alongside the authors, but even if you’ve been at it for a while you’re likely to learn something new – and at the very least you can have a good chuckle at mishaps and anecdotes.