Having read Rivers of London, not going straight on to Moon over Soho was an impossibility, so I did, disregarding all other plans for January reading (the two books appearing between this one and Rivers of London were actually read in 2013).

At the novel’s start, PC Peter Grant is back to his regular training programme at The Folly, and Lesley is at her parents’ house, recuperating. Peter goes to visit, driving from London:

At the end of the road lay Brightlingsea, lining the coast – so Lesley had always told me – like a collection of rubbish stranded at the high-water mark.

I keep loving the way Aaronovitch uses language and the impossibly charming hate-love relationship with London and Britain he displays. Not to mention the cultural references:

At this very moment astronomers are detecting planets around distant stars by measuring how much their orbits wibble, and the clever people at CERN are smashing particles together in the hope that Doctor Who will turn up and tell them to stop.

‘Are you SIO on this, ma’am?’ I asked. The Senior Investigating Officer on a serious crime was usually at the very least a detective inspector, not a sergeant. ‘Of course not,’ said Stephanopoulos. ‘We have a DCI on loan from Havering CID, but he’s adopted a loose collaborative management approach in which experienced officers undertake a lead role in areas where they have the greatest expertise.’ In other words, he’d locked himself in his office and let Stephanopoulos get on with it. ‘It’s always gratifying to see senior officers adopting a forward-looking posture in their vertical relationships,’ I said, and was rewarded by something that was almost a smile.

He is also not afraid to call out institutionalized and internalized racism:

Outside the big cities, my very appearance can sometimes be enough to render certain people speechless. So it was with Harold Postmartin, D.Phil, FRS, Curator of Special Collections at the Bodleian Library, who had clearly been expecting Nightingale to introduce someone ‘different’ as the new apprentice. I could see him trying to parse the phrase but he’s coloured in a way that wouldn’t cause offence, and failing. I put him out of his misery by shaking his hand; my rule of thumb is that if they don’t physically flinch from touching you, then eventually they’ll make the adjustment.

Ok. Enough of the quoting (I think). I’m just trying to show why the books are such a joy to read. The plot is good, too, but it’s hard to say too much without major spoilers, and so  I’ll refrain. If you’re not interested in reading the book, a synopsis would be no use to you, and if you are you don’t want the plot spoiled.

The one negative thing I have to say is that the novel could have used a continuity check, preferably one that aligned with Rivers of London. There are some odd incongruities, most so vague that it’s hard to put your finger on what feels wrong, and some cases of things being explained in the wrong order, so to say. A fact being presented in such a way that you feel you must have missed a connection piece of narrative, only for that connecting piece to show up a little later. It may even be deliberate, but it dosn’t work. Not for me, anyway.

However, on the whole the books are so good that it’s easy to forgive the few flaws. Now on to Whispers Underground! 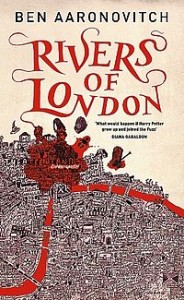 Rivers of London has been on my list for a while, not least because the husband has read and enjoyed all four of the PC Peter Grant books that have been published so far, and thus they have been available to me for a while. Towards the end of last week I found myself unenthused with the books I’d been planning to read during Bout of books, and someone, somewhere mentioned Aaronovitch, and it occurred to me that as we are going to London in just a few weeks, this might just be the perfect time to read them.

In one way it certainly was, Aaronvitch has his story firmly grounded in place and reading this without imminent plans of visiting the city would be frustrating, to say the least.

In Rivers of London PC Peter Grant is coming to the end of his probationary period and is hoping to be assigned to real detective work. His friend, and crush, Lesley May is at the same point in her career. The wikipedia entry sums up their superior officers’ view of the two neatly: Lesley is «expected to go far», Peter is «expected to do paperwork». That is, until they are on watch to guard a murder scene from the general public, and while Lesley pops off to buy coffee and Peter meets a ghost who claims to have witnessed the murder. When their assignments are handed out, Peter finds himself assigned to a generally studiously ignored branch of the Met, the section that deals with magic and the supernatural. His superior officer, Detective Chief Inspector Thomas Nightingale has been the sole employee of this section, and Peter finds himself sworn in as the first apprentice wizard in fifty years, and lodged in The Folly, the section’s headquarters, which is clearly dimensioned for a rather larger contingent.

There follows a tale of riotous rebellion and magic, where Peter finds himself trying to solve two very different «cases». One is the murder that starts the book off and those that follow in a grisly, yet inventive, serial killing spree, the other is a conflict between Mother and Father Thames, the river gods, and their children (the tributaries) and entourage.

Aaronvitch draws on history, mythology and folklore, picking both famous and obscure pieces and sewing them neatly together to form a coherent whole which spellbinds the reader (well, this reader, anyway). There are explicit, if ironic, echoes of Dr Who (which Aaronvitch has written for) and Harry Potter, but I was also reminded of Neil Gaiman’s Neverwhere and of Jasper Fforde’s novels, the latter especially in the way Aaronvitch’s minor characters all beg for a google search. Take Isis, also known as Anna Maria de Burgh Coppinger, wife of Father Thames’ son Oxley: Google her, and you find that there is probably at least another novel there, just in her life story. I love this stuff. And then you have the famous dudes:

Beyond the booth, flanked by two neoclassical pillars, was a marble statue of a man dressed in an academic gown and breeches. He cradled a mighty tome in one arm and a sextant in the other. His square face held an expression of implacable curiosity, and I knew his name even before I saw the plinth, which read: Nature and nature’s laws lay hid in night; God said ‘Let Newton be’ and all was light. Nightingale was waiting for me by the statue. ‘Welcome to the Folly,’ he said, ‘the official home of English magic since 1775.’ ‘And your patron saint is Sir Isaac Newton?’ I asked. Nightingale grinned. ‘He was our founder, and the first man to systemise the practice of magic.’ ‘I was taught that he invented modern science,’ I said. ‘He did both,’ said Nightingale. ‘That’s the nature of genius.’

The inclusion of Newton is another thing I like about Aaronvitch’s universe, though magic is magic Peter takes the scientific approach, and the answers he comes up with seem to confirm his instincts; even magic depends on physical laws.

I like Peter Grant. He’s a good guy, and may even have the makings of a good cop, even if he is too easily distracted. I like Lesley May, too, and I especially like how Peter and Lesley are portrayed as friends. Even if there is an element of «this might progress to more than friends at some point», you still get the feeling that they are friends first and foremost and that they will remain so whether progression happens or not.

Then there’s the language, and the linguistic relation to time and place:

Neither of us could face the horrors of the kitchenette that morning, so we found shelter in the station canteen. Despite the fact that the catering staff were a mixture of compact Polish women and skinny Somali men, a strange kind of institutional inertia meant that the food was classic English greasy spoon, the coffee was bad and the tea was hot, sweet and came in mugs.

There’s plenty for a hopeless anglophile to «squee» about, there is wit and dry humour and there is, occasionally, something akin to slapstick. There are blink-and-you-miss-them cultural references by the score.

Would it kill us to have an official branch of government that handled the supernatural?’ ‘A Ministry of Magic?’ I asked. ‘Ha-bloody-ha,’ said Tyburn.

Where the novel falls short is in emotional engagement. Yes, I like Peter, and I certainly root for him, and I am gripped to the point of considering sneaking off to a quiet corner at work to polish off the last 50 or so pages when the bus ride yesterday morning proved too short for the task. However, the perfect book is the book that puts me in the emotional quandry of wanting to get to the end to see what happens but also wanting the book to last forever. Rivers of London fullfills the first, but not the second. I will allow that there is a chance that I will feel differently at the end of book four, when the prospect of having to wait for another installment starts looming large. I’ll get back to you on that. I’ve already started on book two.

Aaronovitch has a blog: Temporarily Significant, and there is also a website for the series: The Folly.