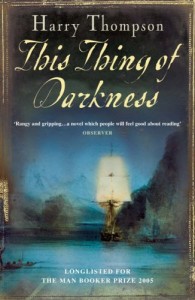 I got this book from Tonbel, who claimed to need someone else to have read it, which is not the worst sort of recommendation.

This Thing of Darkness is a fictionalised account of the life of Robert FitzRoy, who was the captain of the Beagle on two of her surveying expeditions to South America. On the second, he brings Charles Darwin along as the official ship’s naturalist, and we all know what that lead to. The novel is expertly executed, I was hooked after only a few pages, and gives an interesting slant on the emergence of Darwin’s theories. Initially, FitzRoy and Darwin get along like a house on fire, both being reasonably devout Christians and both being interested in «natural history». They set out to investigate physical proof of the biblical flood, amongst other things. However, as Darwin’s theories evolve (no pun intended) and increasingly undermines his faith in God, a gulf opens between the two.

Adding extra depth to the story is FitzRoy’s psyche, he suffers from what might reasonably be diagnosed as manic depression (a diagnose not yet formulated in the mid 19th century).

One of the most interesting aspects of the conflict between FitzRoy and Darwin is how they both appear mule-headed and stupid over some things and both are enlightened and «ahead of their time» in others. If you take the best qualities from both you’d have some sort of superman, as it is we get two fallible, but mostly fairly lovable humans. For example, Darwin sees the natives of South America as savages, not quite human and certainly not in the same class as himself, whereas FitzRoy firmly believes all humans to have been created equal, in God’s own image, and treats them accordingly (though the results are frequently not what one could wish). On the other hand FitzRoy refuses to countenance the idea that life could have been created as anything but «complete» and denies all evidence that perhaps some sort of evolution may have occurred. Darwin, of course, becomes convinced that evolution is the key. Thompson, interestingly, seems to argue that it is precisely Darwin’s desire to believe himself better than the «savages» that keeps his mind open to the idea of evolution, and especially to the idea of humans descending from apes.

On the whole, a novel well worth your time.