We had a shorter than normal gap between two reading circle meetings before Christmas, and so we opted for reading some Christmas stories rather than a novel. The longest was A Christmas Carol by Charles Dickens, my suggestion. The story, of course, is well known to us all, I don’t know how many versions of it I’ve read or seen on screen, however, I have never actually read the original story.

I’m not a Dickens fan. I’ve never managed to finish any of the novels, or even get very far into them (I’ve read around half of Oliver Twist, other than that my record is probably twenty or so pages). I think my main problem is that he was paid per inch, so there is too much filler. Emminently written and beautifully described filler, but filler none the less. When he spends two pages describing a fairly minor character who comes into a room I lose interest, I’m afraid.

But A Christmas Carol is something else. It gives no impression of uneccessary verbosity, and in consequence it is quite beautiful.

“Bah!” said Scrooge, “Humbug!” He had so heated himself with rapid walking in the fog and frost, this nephew of Scrooge’s, that he was all in a glow; his face was ruddy and handsome; his eyes sparkled, and his breath smoked again. “Christmas a humbug, uncle!” said Scrooge’s nephew. “You don’t mean that, I am sure?” “I do,” said Scrooge. “Merry Christmas! What right have you to be merry? What reason have you to be merry? You’re poor enough.” “Come, then,” returned the nephew gaily. “What right have you to be dismal? What reason have you to be morose? You’re rich enough.” Scrooge having no better answer ready on the spur of the moment, said, “Bah!” again; and followed it up with “Humbug.”

Somewhat unfairly, the story suffers slightly from having become a cliché, though since most versions take liberties, there is something to be said for giving the original its due attention. And language-wise it can’t be bettered. 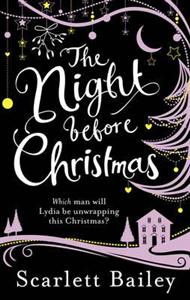 I felt like a light read around the holidays, preferably one with a little holiday cheer thrown in, and when I read about Scarlett Bailey’s The Night Before Christmas on some blog or other (I really need to get better at noting down WHERE I find these tips) it seemed like the perfect sort of thing.

And it would have been too, except for my “I don’t really read chiclit anymore” hang-up.

Because it is chicklit. Not that there is anything wrong with that, per se, but well, I don’t know.

However, this is a perfectly charming book, as these things go. The Christmas cheer is present and correct, the tangled love-life of Lydia, our heroine, just as complicated as it needs to be to fill a couple of hundred pages, and the plot is not utterly predictable. So I did read it all the way through, and rather enjoyed it, too.

Though next year I think I’ll just reread Comfort and Joy. Which is probably chicklit, too, but it has that little something extra that makes it worth reading and rereading. 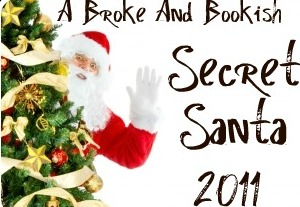 I signed up for The Broke and the Bookish Secret Santa without thinking twice. I mean, I love to send off mysterious packages, and who doesn’t love receiving them? What did I have to lose?

The rules were very open, the minimum being ‘a book and a goodie’, though we were told the average was probably more like two books. My recipient had one of my all-time favourites on her wishlist, so I ordered that from Amazon and asked them to send it directly (as there was no chance in h*** it would reach me in time for me to send it on before Christmas). Hopefully that got there in timely fashion, because what with one thing and another the second part got off to a late start. That contained more books (one old-but-new and a couple of bookcrossing books that I’ve been looking for a good reader for and that seem to be right up my recipient’s alley) and the goodies (no, I did not stop at one). It may not have arrived in time for Christmas, but should be there any day – I hope!

Well, I knew what I sent, but had very little idea of what I might expect to receive. However, a bursting package arrived, and look: 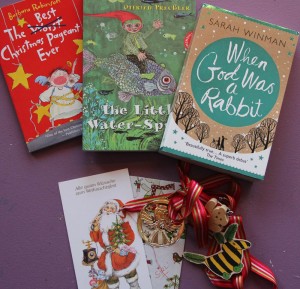 I’m more than happy, I must say. Not pictured: Chocolate. Lots of it!

Two of the books were off my wishlist – The Best Christmas Pageant Ever and When God was a Rabbit, so naturally they made me happy as a clam. My secret santa had found out I have a daughter, so she also sent The Little Water-Sprite, and says it was her favourite as a child and her mother read it to her again and again, so she hopes I will do the same for my daughter. No worries, I will! So nice to have something that was someone’s favourite. The packages were decorated with the most gorgeous ribbon (which I’ll find a use for) and some ornaments, among them a wooden Janosh art rendering which I ADORE. How did you know I love Janosh? I don’t think I’ve ever mentioned it on the blog(s)… Needless to say it’s gracing our tree.

Julaften! It’s Christmas eve, which means to us here in Norway it is now Christmas proper. The ‘ribbe’ is in the oven and in a couple of hours we willbe stuffing ourselves with it, and then the gift opening commences. Yes, we open our gifts on the evening of the 24th. Hopefully there is a book or two under the tree for me.

So this is the last day of my calendar this year, and I’ve found another video that I want to share. One thing we need to watch on tv on Christmas eve (in the afternoon, so would that be Christmas afternoon, then?) is a modified version of ‘Jiminy Cricket’s Christmas’. It’s aired on both NRK (Norwegian state owned tv), SVT (Swedish ditto) and TV2 (Norwegian commercial channel), and I don’t much care which I watch for the most part, but one of the shorts has to be watched on SVT. No Christmas without Ferdinand, ‘som sitter under sin korkek och luktar på blommorna’.

This evening most of Norway (I don’t know the actual numbers, but they’re pretty large) will make sure they catch the viewing of ‘Dinner for one’ on television. We know it as ‘Grevinnen og hovmesteren’ and for some reason it’s traditionally aired on 23rd December, despite the fact that the setting is actually New Years’ Eve. But then, most other Christmas traditions make very little sense, so why should this one? Anyway, to a hefty number of Norwegians, Christmas wouldn’t be Christmas without it.

A cultural marker, and one which is a great example of how we humans see what we expect to see: Most Norwegians who’ve never been asked the question before will swear on their mother’s grave (if she happens to be dead, that is) that the rug James keeps stumbling over is a polar bear. This despite the fact that they’ve watched it once a year every year their whole lives. The human brain is strange. 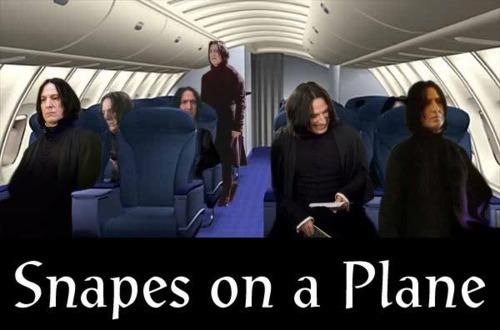 I laughed. Out loud. I’d watch that film. (Via)

Another must-hear before Christmas arrives:

Following up the review of Stardust with a not particularly Christmassy, but all the better for it, quote from Neil Gaiman, found on the bookcrossing website.

Picking five favourite books is like picking the five body parts you’d most like not to lose.

And may I just say that the same goes for whisky? I’ve been asked both in the last couple of days, by people I hardly know. “So, what’s your favourite book/whisky, then?” Uhm. Unanswerable questions that have, for the sake of politeness, to be answered. There’s a reason why I don’t like small-talk very much.