Let it Snow, or more specifically John Green’s story «A Cheertastic Christmas Miracle», was my suggested Christmas read in the book circle, based on very little other than «not too long, christmassy and John Green». The books is a collection of, well, not short stories, I guess novellas might be a better description. Three stories by three different writers, all at just over 100 pages, and with the common theme «Christmas» and «romance». And, yes, YA as target market, I guess. All three stories are tied together into a whole, something I did not realise at first, as I suggested (and read) the middle story by Green for the book circle. It may all have made even more sense if I’d started at the beginning, but it worked well enough in a jubled order as well.

A Cheertastic Christmas Miracle by John Green is a charming story. Admittedly the ending is hardly a surprise, but the main action driver, the quest to get to the Waffle House in a blizzard, is at least original, and provides plenty of comic relief, and the build up is sufficiently long and with enough quirky personality details that by the end I care for the characters. And this being John Green there are plenty of little nuggets of, well, for lack of a better word, wisdom. It helps, of course, that the characters are people I recognise as «my people» (i.e. nerds/geeks) of course. On the whole I am reminded that I meant to read more Green despite not being completely sold on The Fault in Our Stars (not because it wasn’t good, I just didn’t think it was The Best Book Ever™, like the interwebz had led me to belive I might.

Maureen Johnsons story The Jubilee Express was in some ways even better, and quirky in a «that’s preposterous but utterly believable» way. Lauren Myracle’s The Patron Saint of Pigs was somewhat more frustrating, since the main character is being quite infuriating for much of the story, but it somehow came together nicely at the end. For a bit of YA romancey Christmas cheer you could do much worse altogether.

(And I know I am publishing this in August and Christmas is the last thing on most sane people’s minds, but I did actually read the book at Christmas, it’s just that the post has been languishing in the drafts folder while I have been off doing non-bookblogging things. At least you now have plenty of time to order the book from you favourite pusher and have it arrive in time for the festive season.) 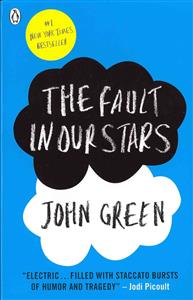 I finished The Fault in Our Stars a month ago, and the reason I haven’t blogged about it is twofold. Firstly, my blogging energy has been engaged in another project, secondly, I haven’t been quite sure what to say about it, or even how I really feel about it.

Sure, it’s a lovely book. I even cried a little towards the end. But the hype got the better of me, I guess, because I was left feeling a little disappointed. I liked it, but I guess I didn’t really love it. Certainly not with the all encompassing love evident almost daily on my Tumblr dashboard.

So will I read more of John Green’s books? Probably. And I’ll keep The Fault in Our Stars around for the lasses’ enjoyment, perhaps reading it at 14 or so will be more of a life-changing event than reading it at almost 40.

As he read, I fell in love the way you fall asleep: slowly, and then all at once.