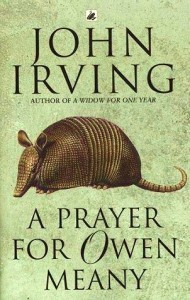 This was a pleasant surprise for me, in terms of John Irving, as I’d concluded I needed to give his novels quite a bit of time before «getting into them». Not so much with this one, it had my interest before I’d reached the 50-page mark.

With around 100 pages left I got to work Monday morning after reading on the bus (as you do), opened the lokal paper’s web edition, saw a picture of Norwegian soldiers in uniform and thought «Huh? We have troops in Vietnam?»

A novel that makes me forget which century I live in? Now that’s a good sign.

It happens occasionally, but not all that frequently. I met a Norwegian who was on an exchange programme from the Norwegian army to the Swedish army in Stockholm once and my first reaction was «But I thought we were at war?», since I was currently embroiled in the Napoleonic wars in the company of Jack Aubrey and Stephen Maturin. This confused the poor bloke no end until one of my friends told him not to worry as my madness was of the harmless sort.

But back to Owen Meany. It’s a compelling story, where you get to know increasing amounts about the end throughout which I frequently find annoying but which Irving makes work. I realised what would happen some time before it happened, but not, I think, before the author intended.

I brought Until I Find You by John Irving along to The Gambia in February, despite being in the middle of Aubrey/Maturin. I thought it would be a good idea to bring a book I could leave behind. Which it would have been, of course, if I’d had more time to read so that I had actually finished it, or if it had been uninteresting enough to dump half-finished. I didn’t and it wasn’t, so it came back home again, and having (finally) finished O’Brian last week I picked up Irving again.

I have some issues with Irving. This is only the second Irving I have actually managed to finish (the first being A Widow for One Year), and it’s a question of circumstance rather than of them being essentially different to the ones I tried and failed with. In both cases I have brought them along for travel reading, so that in both cases there haven’t been all that many other options beckoning me. This is to Irving’s benefit, because I find his novels really slow to start with. In the case of A Widow for One Year I positively disliked the first part, getting more interested once Ruth-as-adult entered the scene, and it wasn’t until two-thirds of the way through that it acquired the can’t-put-it-down-quality of a really good read. Until I Find You similarly drags at the beginning, and though I found Jack and Alice more interesting all the way through, I probably wouldn’t have persisted if I hadn’t already read A Widow for One Year and known Irving to be a slow starter (unlike the Vienna trip, I did bring other books to The Gambia, so I had a choice).

That said, once the pace picks up after a twist in the tale, it really picks up, and I resented having to put the book down for any reason throughout the last 200 or so pages. I felt a little let down by the ending when I read it, but only a little, and it’s growing on me.

Dreadful. And now I can hardly remember what I’ve read all summer (and autumn…). I’m bound to leave something out.

The Imperfectly Natural Baby and Toddler – Janey Lee Grace
Interesting and contains lots of tips for things I hadn’t heard about before, but reads a blit like a list of weblinks at times (this is good for usefulness but for readability? Not so good.)

First Among Sequels – Jasper Fforde
Brilliant, but missing something that I can’t put my finger on. Still, definitely brilliant. Just not quite perfect.

A Widow for One Year – John Irving
Yay! I finally got around to finishing a John Irving novel! I brought A Widow for One Year to Austria planning to release it once I’d finished, but somehow didn’t get as much reading done as I’d intended. For a long time I thought I might just leave it even if I didn’t finish, as I didn’t feel compelled to keep reading, even half-way through the book, but that would have entailed having to buy something else to read, and I never found anything I wanted to buy. By the time we were packing our bags to go home I only had a couple of hundred pages left, and found that the story had grown on me and that suddenly I could hardly put it down. Strange stuff. I might just have to buy some more Irving (especially if I find more cheap second-hand copies like this one).

The Sound and the Fury – William Faulkner
On the 1001 books list. I can see why.

Intimacy – Hanif Kureshi
Also on the 1001 books list, which is why I read it. That is, I read the story actually entitled Intimacy, and struggled to get through that, despite its relative briefness and it’s status as a «classic». I’m sure it’s a brilliant portrayal of a middle-aged guy planning to leave his wife, but I just thought it was dreary. I then read the following story in the book, something Night-ish, and found that it was basically about a middle-aged guy who’d left his wife. And then I gave up. I’m sure I’m at fault rather than Kureshi, we all have our hang-ups and one of mine is that my empathy fuse blows when you mix infidelity into the story and so I fail to connect with the characters at all, which takes the fun out of it.

So Many Books, so Little Time – Sarah Nelson
Unfortunately not as good as I’d hoped. As many of the other readers of the bookcrossing-copy I read I would have liked more books and less life, I guess, but my main gripes were with Nelson’s way of presenting herself and her reading. Firstly, she talks about her «discovery» that you really don’t have to finish books you don’t like as if it’s something profound – a rite of passage, «growing up» – which rather irritated me, but then she goes on to say that she doesn’t want to discuss or give her opinion on books she’s given up on. What? You read 200 pages of a 400 page novel and then decide you really can’t be bothered to finish it, but you maintain that you don’t have the «right» to say that the book sucked (or wasn’t quite to your taste) since you didn’t stick with it to the bitter end? Seriously, if a novel doesn’t manage to capture your attention sufficiently to make you finish it has fundamentally failed in its object and you’re entitled to say whatever you like (well, ok, I’d stay away from such statements as «the ending sucked» if you haven’t actually read the ending, but you know what I mean…). It made me suspect that Nelson really hasn’t «grown up» and that she’s still uncomfortable about leaving books unfinished, for all her protestations that this is something she has learned to do. The other is with the project itself: She reads books for a living, for goodness sakes, and still 50 books a year seems to have been a daunting task? Even last year, when I really didn’t read a lot, I read that much, and I’m up to 43 (and two halves) this year, despite giving birth in January (which everyone told me would be the death of reading novels, as I’d never be allowed to, or indeed able to, concentrate for long enough). I’m not impressed.

The World According to Bertie – Alexander McCall Smith
Perfect, as usual.