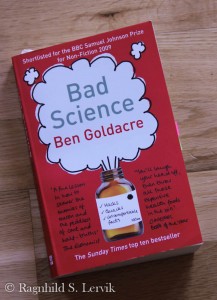 I purchased Bad Science a while back (quite possibly as much as four years back) with the intention of reading it immediately. For some reason or another that didn’t happen, and it’s been hanging around on the shelf ever since. Now that I finally got around to it I’m very glad I did, and a little annoyed that I didn’t before.

Quite frankly, it’s brilliant. It should be mandatory reading, probably, as it would innoculate (ironically) most sensible people against falling for the more glaring whackery – and some of the not-so-glaring, too.

Goldacre has written what amounts to a textbook on scientific method, explaining by example how tests are supposed to work and how they quite frequently are mangled beyond belief. He also explains why important, but unspectacular results are frequently not published (that a given drug doesn NOT work is important, but it’s hardly exciting). And he teaches you how to tell a good science story in the news from a meaningless one (clue: the way numbers are reported, whether it seems to provide an easy solution to a complex problem and whether sources are referenced so that you could go and check them if you felt like it). Along the way he demonstrates that the human mind is mind-bogglingly strange (why clever people believe stupid things) and that its relationship with the body is even stranger (placebo).

I sure wish I could have read something like this when I was fifteen or so, it would have saved me reading about all the various religious and ‘New Age’ solutions to how the world works and wondering if there was something in it. I never really believed it, but I sure tried hard to convince myself about a few things, mostly religion. In the meantime I somehow grew up and decided I no longer needed a grand answer to life, the universe and everything (or rather a grand question, as we know the answer is in fact 42), and now I can smile in recognition at Goldacre’s waxing lyrical about photosyntesis and how our lungs work:

Like most things in the story the natural sciences can tell about the world, it’s all so beautiful, so gracefully simple, yet so rewardingly complex, so neatly connected – not to mention true –that I can’t even begin to imagine why anyone would ever want to believe some New Age ‘alternative’ nonsense instead. I would go so far as to say that even if we are all under the control of a benevolent God, and the whole of reality turns out to be down to some flaky spiritual ‘energy’ that only alternative therapists can truly harness, that’s still neither so interesting nor so graceful as the most basic stuff I was taught at school about how plants work.

(p. 117. This in response to various ‘alternative’ claims about things that will ‘really oxygenate your blood’ and such.)

Which isn’t to say I nodded in recognition to everything in this book, because it also told me a lot of stuff that I only vaguely knew or that was news to me. The bit about the placebo effect, for example, is fascinating. I mean, the placebo effect is fascinating, did you know it even works on animals? I need to read more about it! Also, the sections on how to read statistics were very helpful. I sort of want to do a statistics course at some point, because not getting things like ‘correcting for cluserting’ annoys me. Even if Ben Goldacre describes it this way:

This is done with clever maths which makes everyone’s head hurt.

All in all, heartily recommended!

Postscript: Other sections are not so much illuminating as infuriating. I read the chapter on Matthias Rath – The doctor will sue you now – just before bedtime, and it made me so angry I could hardly sleep. A short summary (though it will probably make you angry, too, apologies for that): Rath, not satisfied with selling ‘alternative’ cures to stupid Europeans who ought to know better because they have access to education and information, has taken his ‘cures’ to South Africa and managed to worm his way in to the already disasterous government mindset that HIV is some sort of conspiracy cooked up by the west, that HIV doesn’t cause AIDS and besides the drugs are really poison meant to kill off all Africans. Better spend the money on Rath’s wonder cures. Selling snake-oil to the victims of the HIV epidemic is simply criminal and Rath, from what I can tell, ought to be brought before the International Court of Justice in Haag.

(…) on any trip to the chemist (I recommend it) you can find a phenomenal array of magic ingredients on the market. Valmont Cellular DNA Complex is made from ‘specially treated salmon roe DNA’ (‘Unfortunately, smearing salmon on your face won’t have quite the same effect,’ said The Times in their review), but it’s spectacularly unlikely that DNA – a very large molecule indeed – would be absorbed by your skin, or indeed be any use for the synthetic activity happening in it, even if it was. You’re probably not short of the building blocks of DNA in your body. There’s a hell of a lot of it in there already.

Thinking it through, if salmon DNA was absorbed whole by your skin, then you would be absorbing alien, or rather fish, design blueprints into your cells – that is, the instructions for making fish cells, which might not be helpful for you as a human.