I seem to have concluded that I will not be able to reread both A Portrait of the Artist as a Young Man and Ulysses before I go to Ireland. Considering the fact that it’s now only 75 hours before I leave for the airport, this is probably a sensible conclusion to come to (especially as I’ll have to subtract at least 12 hours for work and hopefully 22 for sleep).

So I’ve been rereading Tony Hawks’ Round Ireland with a Fridge instead, which is less intellectually snobbish, but at least as much fun. 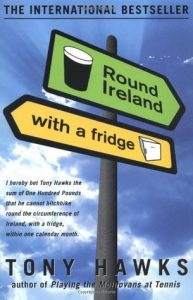 Hawks somehow gets himself into a bet that he can’t hitch-hike the circumference of Ireland with a fridge, and as absurdities go, this one’s quite good in itself and should make for an interesting read at least. Add then Hawks’ exemplary ability to get into contact with people and to relate conversations (something certain other travel writers should learn a bit from), and you’re basically in for a craic. Or something.