In which we learn about the rules of engagement. 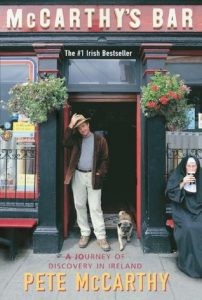 Or was it travel? Having finished Tony Hawks I thought some more travel-in-Ireland was in order and therefore reread Pete McCarthy’s McCarthy’s Bar, where, amongst other things, he lays out a few of the rules of travel. The one that gives the book its name is ‘8. Never pass a bar which has your name on it.’ An admirable sentiment, though somewhat more useful if your name is Pete McCarthy than if it’s Ragnhild Sandlund. Never mind.

In which we go rambling.

I finished The Road to McCarthy last week. A somewhat more rambling account than the author’s previous book (McCarthy’s Bar), but none the worse for that. Not the sort of book I would advise for reading on the bus if you are at all shy about people staring, it is frequently laugh out loud funny.

I then picked up a book I found in a charity shop in Glasgow, Breakfast in Brighton, by Nigel Richardson (or Nicholas, whichever amazon entry you believe – very strange that). In rambling terms it gave Pete McCarthy a run for his money. I’m still not entirely sure what the book was all about. However, it was a very pleasant read. A little knowledge of Brighton and Sussex may be an advantage, but I suspect the book is quite as enjoyable if you’ve never been anywhere near the place.

Having a break in Middlemarch (because I couldn’t be bothered to carry it to Scotland with me), I reread My Family and Other Animals and The New Noah by Gerald Durrell, partly because they are both good, but mainly because I had spare copies which meant I could “lose” them along the way. Hopefully they’ll be picked up and enjoyed by someone else.

While on the last chapters of The New Noah, I conveniently found Marianne Keyes’ Watermelon in a PDSA charity shop in Helensburgh on the 26th and had read it by the 28th. It’s a very good read, entertaining and reasonably light (without being Mills-&-Boon-fluffy) and definitely of the feel-good variety. However, I don’t think it’s one I’ll want to reread (as opposed to Sushi for Beginners), so I left it in the B&B in Dufftown. My bags were stuffed in any case.

I came home to find The Road to McCarthy in the mailbox. I had completely forgotten that I ordered it from The English Bookclub to avoid receiving the editor’s choice, and so was A. pleasantly surprised and B. mightily relieved that I had not bought it while in Britain (despite looking at it in bookshops several times, I kept thinking “Nah, later”). Middlemarch will have to wait while I laugh my way through this on the bus.