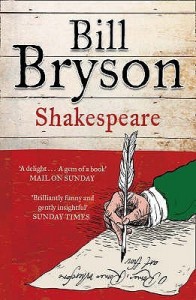 Just before Christmas I headed to Åre by train for a day in order to pick up Box The Messenger and some yule ale. I was about to finish rereading India Knight’s Comfort & Joy, so needed to bring another book in order to have enough reading material for the journey, and so wandered in to look at my TBR shelf (there are TBR volumes all over the house, of course, but I’ve tried to collect a few of them in a bookcase in the bedroom) thinking “it needs to be something fairly light-weight…” I came out with Bill Bryson’s biography of Shakespeare, and for a second felt a bit like Hermione (“I took this out of the library ages ago for a little light reading”). However, in some ways it makes sense. Not that “light-weight” is a fair description of the book, it’s a sound piece of scholarship. What it is, though, is an easy read.

In typical Bryson-style we are taken through what is known of Shakespeare from birth to death (and a little of what happens before and after, too). What is known is so little that a bare-bones telling of that would cover perhaps two pages, so in order to reach two hundred Bryson also expounds on how we know what we know, why we don’t know more (hint: We don’t really know much about anyone from the time, in fact we know a suprising amount about Shakespeare) and rather a lot about all the stuff people have guessed, surmised, interpreted or plainly made up over the centuries. He is appropriately dismissive of those who insist Shakespeare could not have been the author of Shakespeare’s works, but takes the trouble to point out the flaws in the various theories for who else could have been, a few of which I had not heard before. And as could be expected manages to cram an impressive number of little anectdotes into the whole.

So: An easy and pleasant read that leaves you feeling like you learned something, too. Like pretty much everything else by Bryson, I can wholeheartedly recommend it. And finishing it in 2016 means I can tick off task 6 of the Book Riot Read Harder challenge, so there is that.

7 thoughts to “Shakespeare: The World as a Stage – Bill Bryson”