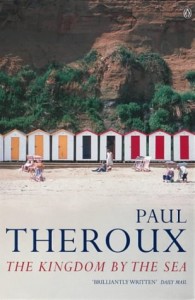 In which we sigh deeply.

Well, I read the chapters on Scotland in Paul Theroux’s Kingdom by the Sea. I would have read the whole thing, except when I went to get it from the shelf I was of the impression that I had read maybe the first couple of chapters, and then I found my bookmark (receipt for lunch at the Red Lion in Arundel) more than half the way through. So I figured if it was no more memorable than that then I certainly couldn’t be bothered to read more than the pertinent 3 or 4 chapters.

This book is celebrated as a «classic» in travel literature. The blurb on my copy calls it: «His candid and compulsive account of a journey round the coast of Great Britain.» Well, I obviuosly didn’t find it compulsive the last time I tried it, and I can’t say it has improved on me much. And is he candid? They’re not asking much, are they? Ok, so he says «I came to hate Aberdeen more than any place I saw» and calls it «an awful city». I dunno, maybe he was the first one to do this sort of thing (were travel writers embarrassingly positive about everything they saw before Theroux?), and maybe he’s just lost some oumph in comparison with his contemporary colleagues?

Still searching for that elusive travelogue from Scotland that will really make me feel that I want to be where the author is, eat in the cafe he/she eats in, scale the same mountain. Theroux was not it.