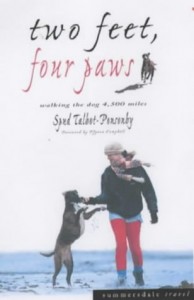 In which we walk and then walk some more.

I’ve just finished Spud’s book (Spud Talbot-Ponsonby being a bit more of a mouthful, and I’ve been on first-name basis with her throughout the book) – Two Feet, Four Paws, walking the dog 4,500 miles. Though very enjoyable, and definitely recommended, it left something to be wished as a travel journal. It’s not Spud’s fault, really (nor is it Tess’, the dear thing), in a way it’s mostly my fault, as I was looking for quite a different sort of book when I picked this up.

The story is, of necessity, a bit «rushed». Covering ten months’ walking in a overcomable number of pages is bound to leave the reader feeling out of breath, we are never allowed the time to linger for much more than a paragraph before being hurried on a few more miles along the coast. To me, this was equally unsatisfying for the places I knew nothing about, but wanted more information on, such as the Scottish towns that I will have the chance to see in September, and the places I know fleetingly or intimately from having been there myself; Blackpool, Llandudno, Aberystwyth, St. David’s (which would be pure bliss if there was just one pub with decent food), Carmarthen, Swansea, Burnham-on-Sea, St. Ives, Mousehole, Penzance (Janne and I walked the stretch from Penzance to Mousehole in the driving rain at New Year), Falmouth (where we anchored the yacht for the night and I was nearly drowned by rain – again), not to mention the stretch from Rustington to Shoreham-by-Sea, where I’ve walked and cycled so much I no longer know which bits I haven’t covered, and finally Hove and Brighton (with the delapidated West Pier, which in many ways is better worth a roll of film than it’s neighbour which is still going strong) – they all passed in a blur, and I wanted to grab Spud’s sleave and make her slow – if not her steps, then at least her narration.

On the other hand, just reading about walking made me want to walk. Solvitur ambulando, it is solved by walking, is a phrase Spud repeats, and how well do I know what she means. And if you can walk with the sea on your left (or right, frankly, I don’t care which), then so much the better.

As a guide to Scotland, of course, it wasn’t much good, but then it’s a bit unfair to expect that just because that was what I was originally looking for when I went to the bookstore. It’s like picking up War and Peace and expecting to find Dorothy Parker (or vice versa). Another thing I, quite unreasonably, missed was contact with people. The thing that makes travel literature come to life for me is anecdotes of «meeting the natives», in a book about a girl and a dog walking a largely solitary coastline is unlikely to produce much of that (though what little there was was worth reading the rest of the book for, even had it not been worth it for other reasons).