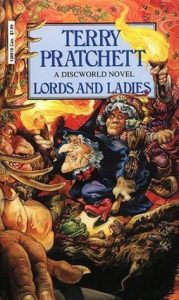 It’s odd how it is, some books have to find you at the right time. Even ones that «everyone» likes. I’ve lost count of the number of times I’ve tried reading Terry Pratchett. I’ve read Good Omens, of course, because Neil Gaiman, and it’s brilliant, so after finishing that I definitely tried something Discworld. And prior to that I tried because Pratchett shows up in the sentence «If you like Douglas Adams you will enjoy…» And I do. Like Douglas Adams, that is. Pratchett not so much. Until now. It must be 25 years since I first tried and suddenly there I was looking at the emergency shelf we keep at the in-laws’ summer house thinking I need something fairly light-weight to read now (as Fatland’s Grensen really needed some concentration and I was getting bored with Anna’s Mr God – more on that later) and my eyes fell on Lords and Ladies and I thought «Why not?» and suddenly the nearly four hundred pages were read and I’d even laughed out loud a few times.

So, yes. I’m not going to say too much about the book itself, I’m not sure I could bring anything to the table that hasn’t been said already. My own experience, however, is, if not unique, then probably unusual, because I found myself drawn to rereading The Rivers of London series (or more specifically Foxglove Summer). Because of the murderous unicorn and the fair folk. And I see that it is almost 100 % certain that Aaronowitch has read Pratchett (something Goodreads can confirm by the way), but I also see that as for myself, though I did enjoy Pratchett this time, I prefer the Aaronowitch brand of fantasy, where the main plot is set firmly on planet earth, fantasy or no.

Let me also say, by the way, that Pratchett is nothing like Adams, except in so far as humour in sci-fi and fantasy is a sort of genre by itself.

But that being said, I now want to read more Pratchett. And the Discworld universe is… complicated. It’s been years since I first saw the (seemingly) excellent chart by Krzysztof K. Kietzman and since I started in the middle it was difficult to know where to go from there. So I asked Facebook. That is, I asked my Facebook connections, assuming I’d have at least one major fan on my friends list (I did). The advice varied, but Siri Pettersen ordered me to start from the beginning and you really don’t want to ignore orders from Siri Pettersen, so I have now reserved The Colour of Magic at the library. For good measure I reserved Equal Rites, too, as that’s the first book in the witches storyline, and having enjoyed reading about the witches already they seem a fairly safe bet. But if The Colour of Magic turns out to be readable and not a stumbling block I guess I will go with chronological order as published.