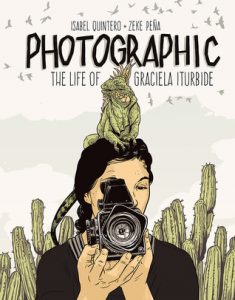 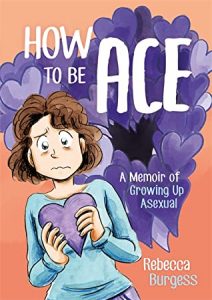 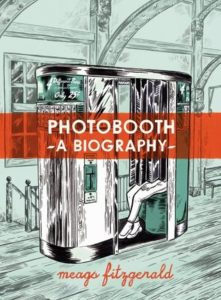 I’ve become especially fond of looking for non-fictional graphic books when I browse the selection at the library, and so I did not hesitate in picking up Photobooth: A Biography by Meags Fitzgerald. I’ve never been bitten by the photobooth bug myself, though had the cost locally been cheaper I might have been (it was 50 kroner, or about 8 dollars back in the early to mid 90’ies when I was the right age). Meags Fitzgerald, on the other hand, was bitten, and hard. The book tells the history of the photobooth and some of the inventors who created and improved it. In paralell we get the history of Fitzgerald’s love-affair with photobooths, which spans at least a decade.

The art in this book is stunning. Both the loving depiction of different models of photobooths at their locations and the «copies» of photobooth pictures, both the author’s own and historic ones are a feast for the eyes. It’s also fascinating how such an oddly specific subject can work as a foundation for a book, and how something can be both very, very specialised as a hobby while dealing with something so incredibly mainstream (who over the age of twenty or so hasn’t had their picture taken by a photobooth?).

I must admit to being inspired to search out a photobooth or two. Unfortunately, chemical photobooths may be very hard to find these days. Not just because digital ones are much easier to maintain and offer more flexible options for the consumer (a choice of size of pictures, for example), but because some of the chemicals used are actually quite dangerous to handle, and so the EU (according to the book) were discussing banning them entirely in 2016. The chance of me finding a booth in Europe might therefore be slim. However, the website for enthusiasts, photobooth.net, which is also discussed by Fitzgerald, offers a location search, and while there are none listed in Norway, there are a few listings in places I might find myself this summer (pending the ongoing corona pandemic). If I do find one, I’ll be sure to share any pictures. 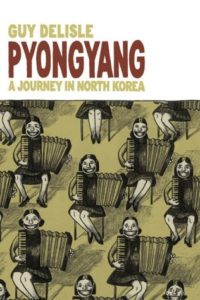 It’s been six years since I read Guy Delisle’s Burma Chronicles and was ambivalent about it. When picking up a selection of graphic novels at the library recently, I decided it was time I gave him another chance and borrowed Pyongyang: A Journey in North Korea, since North Korea is interesting. I sort of regret it now, but I won’t give him the benefit of the doubt again. Because all the stuff that bothered me in the Burma Chronicles bothered me even more in Pyongyang, and it was joined by a casual racism (calling the performing children «savant monkeys»!) and blatant misogony that completely undermines any point Delisle may have had to make. I mean, who recounts a series of torture techniques in drawing and writing and then writes this down and thinks, «Yeah, that’s the vibe I’m going with»? 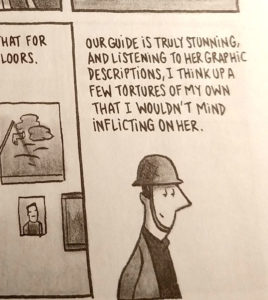 Delisle arrives in North Korea for a six week stay, supervising the production of cartoons his employer has outsourced for cheap labour. The sequences where Deslisle tries to explain why a scene needs to be redone affirms my impression that outsourcing creates so much more labour that you would be lucky to actually save any money, but that is not something Deslisle addresses (or: if addressing it was his intention, it gets lost along the way). He seems instead to use the examples purely to reinforce the image of the North Koreans as intellectually inferior, which permeats the whole narrative.

You’d think an intelligent man would consider whether the reason the North Koreans he talks to never criticise the regime they are living in is simple caution and life-preserving instinct, but instead he seems to think that they are… stupid? Brain-washed enough to actually believe the propaganda they feed him? And like in the Burma Chronicles he doesn’t seem to consider that he may be putting others at risk with his behaviour. He gives 1984 to one of his guides to read, for example, as if for a social experiment. Now, I have noe idea whether 1984 is a banned book in North Korea, but it wouldn’t exactly surprise me if it were, and what exactly happens to people caught with banned books in authoritarian regimes, again?

It’s a pity, too, because I still really like Delisle’s drawing style and there are definitely some great scenes in the book, too. He finds himself at a picnic on a trip to a museum: 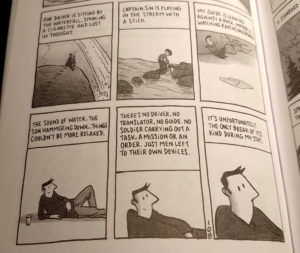 The moment touches on something that is not only quite charming, but possibly quite profound, too. But it flickers out again and descends into «white tourist mode» again.

I could have saved myself the trouble had I bothered to read the reviews on Goodreads before starting the book, so if you’d like more examples, go have a nosey. I’m hardly the only one who’ve ended up wanting to throw the book across the room, it seems.