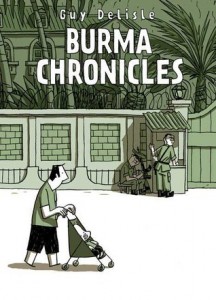 Burma Chronicles by Guy Delisle was a Christmas gift and I read it during the Christmas holidays. Delisle is a Canadian cartoonist and animator, and this is his third (as far as I can gather) travelogue in graphic novel format. Delisle spent a year in Burma (Myanmar) with his wife who works for Doctors Without Borders and his son who was a baby at the time. The book chronicles their stay, the mundane, every-day workings of a household as well as the inevitable politically charged incidents.

Delisles artwork is, well, I was going to say flawless, but that might be stretching it a bit far. Let’s say «very good». The drawing style is deceptively simple, but catches enough detail to set the scene perfectly. Clever techniques are used to excellent effect, such as the trouble of drawing with ink in the rainy season:

However, as far as the narrative goes, I have a hard time deciding whether I love it or loathe it. There is, after all, no rule that says that a book from Burma must neccessarily be all about politics and suffering and so on. And to a certain extent some of the best sequences in the book involve Delisle going about his normal activities and accidentally stumbling into something that is loaded with meaning, or even menace, simply because this is Burma and not Canada. However, sometimes the white, male tourist takes over and makes me fundamentally uncomfortable. He keeps wanting to go into the forbidden zones, for example, and seems annoyingly unconcerned about the possible dangers, not only to himself, but to the people he’s with (if he’s caught traveling without a permit, surely that must create difficulties for the organisation his wife works for and those employees that actually need to be there?). And his sole reason for wanting to go seems to be pure curiosity, and smacks of slum tourism. Something which is not helped by panels like this: 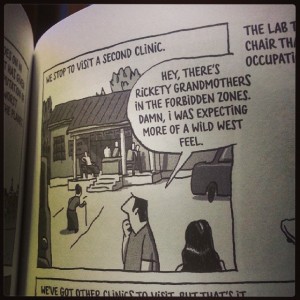 To a certain extent Delisle’s «living in a priveleged bubble where nothing I do can hurt me»-attitude helps throw into relief some of the atrocities of a dictatorship like Burma, but it fails to work (for me) as often as it does work. So I don’t know.