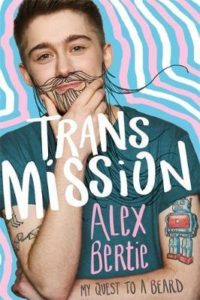 Trans Mission is both a narrative about one person’s experience with discovering his gender identity and seeking medical help to transition and a sort of Transition 101. For anyone who knows little about what being transgender and taking steps to transition entails (whether questioning their own identity or just wanting to be a better ally) it’s probably quite a useful book and it’s definitely the sort of thing that I’d recommend for a school library.

The book reads rather like a transcript of a series of YouTube videos, which is unsurprising considering Alex Bertie is a YouTuber. It’s not neccessarily a bad thing, especially for the (probable) intended audience. The style is chatty and personal, and makes me feel old. I am not joking, either, Alex comes across as very young to my eyes. But then again: He is young. I assume I’m likely about the same age as his parents. I found myself wanting a smidge more mature reflection while reading, but I’m not actually sure that that would have improved the book as is. Perhaps I just wanted to read a different sort of book altogether.

It’s interesting to read about the process Alex had to go through with his parents before they were won over to fully accept and support his identity, but also frustrating, as I find the whole concept of not accepting your child they way they are wholly foreign and… bisarre. Being slow to catch on and needing things spelled out is one thing, actually denying reality or trying to convince the child it is “just a phase” quite another. Though I suppose Alex has a point when he sums it up:

Transitioning is always going to be a big deal to your parents and they’re never going to respond with, ‘Oh golly! I’m so glad my child is trapped in a body that makes them feel horrible!’ (At 38 %)

An episode both Alex and his mother (who gets to have her say in a chapter at the end of the book) recount is how he was forcefully persuaded to wear a dress at a junior prom. Even though he was not out as trans at the time (or even yet himself aware), what would the harm have been in letting him choose a suit? At least there’s a happy end, so to say:

His college leaving party was much better than his middle-school prom. Alex went in clothes he had chosen himself, with the hairstyle he wanted, and not an ounce of make-up in sight. He had no stress about conforming to the expectations of others, or the related pressures of gender dysphoria. My happy child was back: his college party photos are of a beaming Alex posing with all his mates. Finally, he was comfortable and settled and looking forward to his next chapter in life. (At 89 %)

Getting the mother’s point of view at the end is a good idea, but I don’t feel like it really provides an explanation for the slow process (and to some extent seems to suggest that there was a lot of miscommunication rather than actual lack of support). Perhaps it would have been more interesting to hear from Alex’s father, who seems to have taken a much longer time to accept reality?

I certainly learned something from Alex, though, and that’s never a bad thing, even if I think I was hoping for a different sort of book. (On that note: Hit me with suggestions for memoirs by trans people if you know any!)