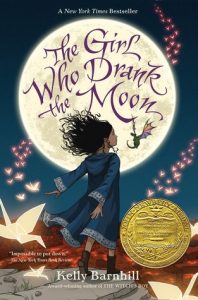 A buzz on Twitter a while back made me add The Girl Who Drank the Moon by Kelly Barnhill to one of my Adlibris orders, and it seemed like a good book to pick up while waiting for the next Pratchett from the library.

I can see why people would be enchanted by The Girl Who Drank the Moon, though for me it fell somewhat short of its potential (perhaps precisely because I had read about people being enchanted). I’m hard pressed to put my finger on exactly why, though, because when I try to sum up the cast of characters and the plot it seems to me that the book should be a perfect fit. The closest I have come to a reason is that I don’t feel I get to know any of the main characters as well as I’d like, or as well as I’d need to in order to really care about what happens to them. It is partly a consequence of the way the plot centers around forgetting (or rather repression of memories) and storytelling as a way to deceive rather than inform. The reader is partly kept in the dark along with the characters, which is unavoidable for the plot’s progression, but I think this is what detracts from the character building. For a large part of the novel the main characters are not wholly themselves, insofar as you need your memories to be yourself, and it certainly affected my perception of Luna, Xan, Antain and the rest. That said, towards the last hundred pages or so the fog is lifted, literally and figuratively, and I am much more invested in «what happens next». Unfortunately, of course, the novel then ends (and it’s not reading as though a sequel is intended).

Still, it’s a good book, in fact I’d say it’s a very good book. It just lacked that final 5 % tug-at-my-heartstrings-from-page-1, and that is so exceedingly rare that it really is unreasonable to ask for it.

One thought to “The Girl Who Drank the Moon – Kelly Barnhill”