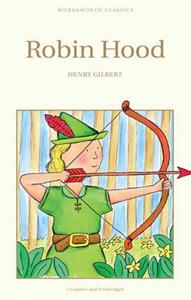 One of my many hangups is Robin Hood. It’s all Rosemary’s fault. Anyway, I sort of collect Robin Hood books, and although I reread The Chronicles every so often, I sometimes read one of the other versions just to complain of how it doesn’t measure up. Well, maybe that’s not actually the reason for reading, but it’s often the result, though there are exceptions (The Outlaws of Sherwood by Robin McKinley is excellent, if untraditional, for example). Anyway, back to Gilberts version, which I purchased because the paperback was so cheap and then thought “That was silly, I probably have it in hardback”. However, I didn’t. So on the whole it was very wise rather than silly.

Gilbert follows the traditional story. How Robin becomes an outlaw is familiar, so is his meeting with Little John and with Friar Tuck. On the whole, I enjoyed the book, but the language almost defeated me at times. Gilberts foreword is dated 1912. His language is, well, I think he meant it to be dated to Robin’s age, that is the 13th century, but I doubt anybody ever spoke like that. And even if the dialogue is representative, does the narrator really have to follow suit?

Sometimes, though, the result is humorous rather than annoying, such as this: “being greatly angry, [King Richard] marched to [Nottingham] and sat down before the castle with a vast army” (p. 229). I mean, picture it! King Richard and a great army sitting in front of Nottingham castle like they’re at a picnic. Or when the “elegant” phrasing gets in the way of sensible numbers: “One or two of the robber leaders, however, had defied Robin, and fought with him. Three of these he had slain, while four others had yielded to him and became his men.” (p. 103) 3 + 4 = 2? Ooooh-kay.

Anyway, on the whole I recommend Sutcliff instead of Gilbert. But that’s hardly surprising.