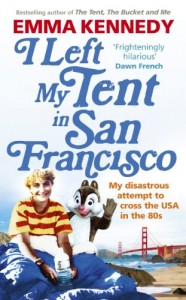 I Left My Tent in San Fransisco by Emma Kennedy was one of the books I managed to pick up in Elgin last Saturday. After cracking up over The Tent, the Bucket and Me in February, it was a must-have. When the kindle ran out of battery one evening and I couldn’t immediately lay my hands on the charger, I started it, and I also brought it on the plane, as the kindle is no good during take-off and landing (being «electronic equipment» which has to be switched off).

Emma and her friend Dee go to the USA in 1989. The plan is to get jobs in San Fransisco for two months, earn lots of money and then travel back to New York for flights home, seeing the country on the way. Unfortunately, getting jobs in San Fransisco isn’t as easy as the pair have been lead to believe, and they end up having very little money to cover their trek across the nation.

The book is very funny. It is even laugh-out-loud funny, just like its prequel. It’s less funny than said prequel, but perhaps that’s mostly because I have been camping but I have never travelled across the USA by ground transport, and so the force of recognition is diminished (though not absent, I have, after all, travelled in the USA and also made my way around rather large chunks of Europe by bus).

Some of the best parts of the book concern the people Emma and her friend Dee meet along the way. They have to rely heavily on the kindness of strangers in their travels, and meet some pretty odd characters. To a certain extent this is also where the book is least satisfactory, because the description of the people and the situations are just a bit too shallow or short to really grab me as a reader.