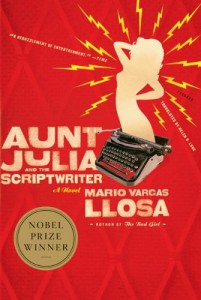 Well, I finished. Not in September, I grant you, but I hope I may be forgiven. I may also struggle with managing North America in October, I suspect, unless I locate my copy of To Kill a Mockingbird quite soon.

Now, then, what did I think about it?

To start off, it’s not the book’s fault that it’s taken me three weeks to finish. Neither is it the Kindle, though I had one occasion when I wanted to read where the battery was low and I had no charger, reading on the Kindle was mostly problem-free. I also loved the possibility of looking up words there and then, especially since Llosa (or, rather, Llosa’s translator) used a few words I didn’t understand. The slowness was an effect of the backlash I tend to get when I’ve been reading the Aubrey/Maturin series, since while rereading that I tend to spend all my so-called spare time reading, so when I finish I tend to read less for a couple of weeks (spending my time on the PC or even – gasp – watching television, instead).

Having said that, it did take a couple of chapters to get into Aunt Julia and the Scriptwriter, but once I did get into it, it seemed to flow by quite quickly.

The plot centers on Mario, an 18 year old aspiring writer who works at a radio station in Lima while studying law. Aunt Julia is a divorcee who comes to Lima to live with her sister (who is married to Mario’s uncle), and despite the age difference, the two fall for each other. Parallel to the love story runs the story of Pedro Camacho – the scriptwriter – who is hired by Mario’s employers to write the novelas (soap operas) that are broadcast by the station. The novel is autobiographical (something I’d partly guessed but which I only had confimed when I loked it up on Wikipedia just now).

I’m afraid I didn’t really engage in Mario, which automatically means I didn’t really engage in the novel as much as I would have liked. I didn’t really care, for example, how the love story would turn out. I didn’t really care whether he was going to become a writer, a lawyer, a radio news editor or a failure. I was much more interested in Pedro Camacho, at least as a phenomenon if not a person. Unfortunately that part of the story sort of petered out a bit and felt somewhat unfinished (though I am sure that is because I was interested in Pedro as an end in his own right, rather than as a means to educate Mario – which is how I feel Llosa meant him). On teh whole, therefore, though I liked the novel and feel like I should probably read more Llosa, I didn’t love it – not by a long stretch.

According to my father The Feast of the Goat is Llosa’s best novel (of the ones he’s read). I might try that next (especially because I can borrow it from him).

2 thoughts to “Aunt Julia and the Scriptwriter – Mario Vargas Llosa”