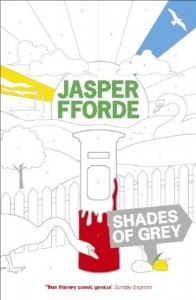 In Shades of Grey, Fforde departs somewhat from his earlier novels. The number of literary references are significantly down (though not totally absent) and the plot is set firmly in the future. The setting is Britain, but not as we know it, I guess one would call it a post-apocalyptic fantasy. Swans have evolved into seriously dangerous animals, giraffes and other exotic animals roam the wilderness, but most importantly people have lost the ability to see the world in multicolour, and how much and which colours you can see determines absolutely your place in society, your career, your marriage prospects and even your life expectancy.

To say I enjoyed the book would be an understatement. There is something about the way Fforde’s brain works that is immensly appealing to me. Mostly it’s hard to put my finger on what exactly makes it so good, but to me this is the bees’ knees and the cat’s pyjamas. It’s interesting, actually, because I have been wondering whether the appeal of Fforde’s prose was mostly due to the literary geekyness, but this book proves otherwise (though I guess I’d have to admit to some pre-existing chromatic geekyness). Simple things like the naming (and the capitalization) of the «apocalypse» – it’s the Something that Happened – gives me the same sort of thrill I normally only get from Really Good Poetry.

In fact, the only downside I can see to Fforde as an author is that it takes way too long between each new book. But I guess you can’t really rush this calibre of quality.

One thought to “Shades of Grey – Jasper Fforde”