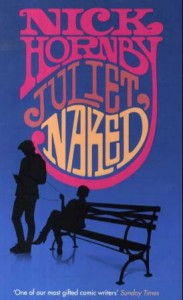 I’ve seen Juliet, Naked hailed as «Nick Hornby back on form». I’m slightly puzzled as to what he’s supposed to be back from. The phrase suggests that he’s been churning out mediocre novels, which is hardly the case. «Nick Hornby back» would be more accurate, as his last novel for adults was A Long Way Down in 2005, but 2005 is hardly that long ago, and it’s not as if he’s been sitting around twiddling his thumbs in the meantime. I suppose it’s possible that whoever thought this was Hornby back on form has really only liked High Fidelity and has been waiting for a new Hornby-novel with music geekdom as a backdrop.

Annie has spent the last 15 years with obsessive music fan Duncan. The object of Duncan’s obsession is the reclusive singer-songwriter Tucker Crowe. As the novel starts, Annie and Duncan are on a tour of the US visiting sites connected (sometimes tenously) with Crowe, and Annie is beginning to wonder if she has wasted the last 15 years and what to do about it. They return to the sleepy little English seaside town where they live and shortly after Duncan receives an early copy of Juliet, Naked, the first Tucker Crowe release in over a decade, which consists of early versions of the songs on his signature (and last) album Juliet. Annie and Duncan’s different reactions to the album are a major part of their breakup. Annie is annoyed by Duncan’s glowing review, posted on the fansite he runs, and writes her own, which Duncan grudgingly agrees to post. She receives a couple of emails as a reaction, one of which is signed Tucker Crowe.

On the other side of the Atlantic, the infamous Tucker Crowe has his own problems. He’s preparing for a visit from a daughter he’s never met, and coming to the realisation that his relationship to his youngest son’s mother is coming to an end.

I’m not quite sure how to describe Juliet, Naked. Words like «charming» and «fetching» come to mind, but they give the wrong impression to a certain extent, a little belittling, perhaps. The novel is serious enough, for all love, and deals quite effectively with themes of love and parenting, and fandom, too. «Intelligent, charming and laugh out loud funny» – how’s that? All I can say is I had a minor crisis the day I accidentally left the book at work with only 50 or so pages left to read.