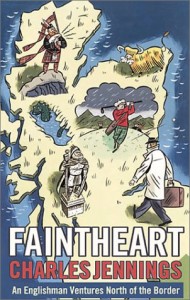 In which we advise the author to stay at home next time.

I finally got hold of a couple of travelogues of Scotland of the sort I was looking for – thanks, yet again, to amazon – and started Charles Jennings’ Faintheart on my way to Stryn last week. It’s pretty entertaining, but still, I am far from satisfied.

It’s very funny in parts, his description of sheep, for example: «a sheep wandering across the road looks somewhere between a big dirty hairy dog and a maggot on stilts». He also made me want to visit the Glasgow Necropolis, a «non-denominational ‘hygenic’ graveyard» in Glasgow like Pere Lachaise in Paris. So what’s the problem?

Well, the exact problem is a bit hard to nail down, but I get the feeling that it is all slightly pointless, somehow. It’s not so much that he doesn’t have a «purpose», like, I don’t know, travelling around the coast of Britain counter-clockwise, and that this makes him move around in a rather unstructured way. I have no quarrels with a little well-applied randomness. And it’s not that he doesn’t have a specific purpose for going to Scotland, like, I don’t know, drinking a measure of scotch in every pub called Mac-something, either. You shouldn’t need a purpose to travel anywhere. It’s more that he gives the impression that the only reason he’s in Scotland in the first place is that he’s decided to write A Travel Book, and then picked a piece of paper with «Scotland» on it out of a hat. He doesn’t seem to want to be there. That’s it. Much of the time he really seems like he would much rather be somewhere else. Like back in the office London. What sort of idiot would rather be back in an office in London than travelling around in Scotland, even if it’s raining? And if he would really rather not be there, why doesn’t he just go home? Find another country to write a travelogue from? Write a completely different sort of book? Why can’t I be in Scotland instead of this embittered and whiny journalist? And if he actually does want to be there, and is enjoying himself, why does he keep giving the impression that he is constantly disappointed and/or depressed?

Another thing that left me unsatisfied is that there is virtually no contact with people. If you read the bit about Two Feet, Four Paws, you’ll remember that I chastisised myself for being unreasonable in craving contact with people in Spud’s case. I don’t think it’s unreasonable to expect just a little human intereaction from Jennings, though. After all, he spends most of his time in pretty populated places. He goes to several pubs, for example (though he finds most of them dismal – why doesn’t he move on? Don’t tell me there are no nice pubs in Scotland, because I won’t believe you), and we are treated to some delighful conversations – but they are conversations he overhears, he never dares involve himself at all.