I picked Goodnight Punpun up at the library because it looked intriguing. It was only once I got home I realised that it was actually manga. I’ve been meaning to read more manga, so this didn’t faze me much, but now I’ve read it I’m not so sure. It was… weird.

However, as I said, it was weird.

One thing is that that’s Punpun on the cover. His family looks like this: 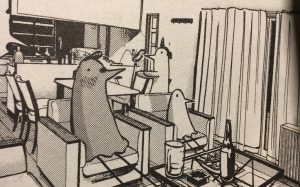 While everyone else looks normal: 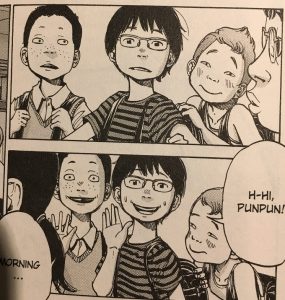 Which I failed to see the significance of, to be honest. It’s probably me being dim, though.

Well, I say normal… Fairly normal, most of the time. However your teacher may look like this if he thinks you haven’t done your homework: 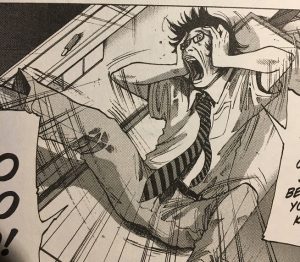 And you principal and head teacher may look like this while planning a game of hide and seek (a storyline I also completely failed to see the point of, by the way, but that’s by the by): 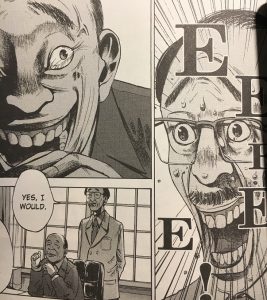 (Yes, I am aware that exaggeration of physical expression of feelings is usual in Japanese graphic art. Still.)

Also, if you chant: 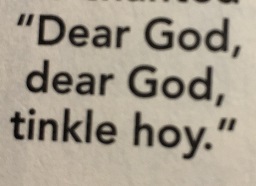 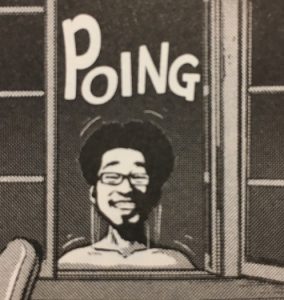 He will talk to you, and answer (some) questions, but his advice isn’t particularly helpful. So, one thing that’s fairly realistic in the story, then.

As for the rest, it basically mostly baffles me. There doesn’t seem to be a plot, as such. There’s a story running through most of the volume about domestic violence and divorce as a result, but it’s… weird. And then there’s the guy who has recorded over a porn video in order to confess to murder, and the following hunt for bounty. Which is also mostly weird. And Punpun himself is… weird. Not just weird-looking, but expressionless and full of feeling at the same time (which is a hard act to pull off, I suppose, which might be why it doesn’t really work).

The plot of Wandering Son centers around Shuichi Nitori, «a boy who wants to be a girl», and Shuichi’s friend Yoshino Takatsuki, «a girl who wants to be a boy» and I find it quite fascinating for a variety of reasons. There are another 7 volumes to go, and I will definitely be reading them all once they appear in English.

The English edition is «unflipped», which means that though the text is translated, the pages are printed like the original, you need to start at what we’d consider to be the back of the book and read the panels from right to left. You’d think this would be tricky to keep track of, but once you’re into the story it’s such a page-turner that I really didn’t notice.