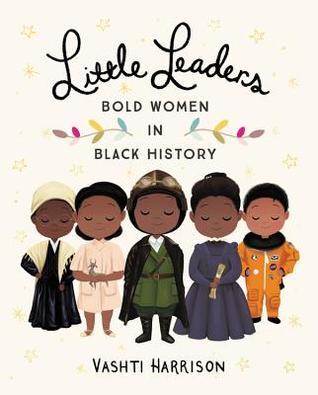 I purchased Little Leaders: Bold Women in Black History as part of a book haul through the children’s school some time last year (I think), and it’s been laying around waiting for attention ever since. I finally picked it up in order to cross off the square «Barnebok av svart forfatter» (Children’s book by a black author) on the Black author bingo reading challenge hosted by @litteraturenogmeg on Instagram.

It’s a quick read (for a grown-up), and it’s interesting in the sense that it highlights a selection of women who certainly deserve more attention for their contributions to society. Some I’ve heard of before, some not. I could easily use the list of names as a starting point for a biography TBR-list without skipping a single one of them.

However. Though the intentions behind the book are undoubtedly good, the execution leaves me unenthused on several counts. The texts are short, which they need to be in this format, but they also read… formulaic, dry and lacking in any enthusiasm for the subjects. The illustrations are cute, but I soon found myself vaguely annoyed by the fact that all the women are depicted with their eyes closed, then uneasy when they increasingly (the feeling getting worse for every iteration) seem like paper cut-out dolls just dressed in different outfits and hairstyles and finally exasperated at the combination of the cutesy, doll-like pictures and the «little» in the book’s title, which all contribute to a feeling that the (in reality strong, bold, intelligent, brave and wildly exciting) women are infantilised and… made unthreatening and «acceptable». Which I assume is pretty much the opposite of the author’s intention.

Which is a pity.

The author does say (in the foreword) «I originally envisioned them as little girls serving as stand-ins for these famous women – that’s why they’re ‘little’ – but as I’ve started sending them out into the world, they’ve become bigger than I imagined. I designed them to be interchangeable because I want you, the reader, to see yourself in any one of them, and to feel their strength and possibility in you.» So there is evidently some thought behind the aestetic choices, even if I disagree with their effectiveness.

I found this review by Julie on Goodreads interesting. She agrees with many of my views on this book in particular, and also compares it with other books in this… genre (?), of which she is similarly underwhelmed. I think we’ve got the first Rebel Girls collections on our shelves somewhere, so I’m going to hunt that out and see if I like it better than this book. From my point of view having some of the heroes being obscure is actually a plus, I’d have thought lifting the stories of people we for some reason (see also: patriarchy and white supremacy) have not heard of before is part of the point of these collections, but it’s hard to judge before having read through the book myself.

In any case, Little Leaders is not a bad book. It’s just nowhere near as good as I’d hoped (or that the subject matter deserves).