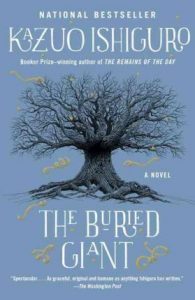 The Buried Giant by Kazuo Ishiguro was the March pick for the reading circle. For obvious reasons, our March meeting never went ahead, and so I have not had the chance to discuss this book with the others, which is a pity, because I really need to talk to someone about it in order to figure out what to think. Because… It’s weird.

Even after finishing the novel I still don’t know what genre it is. It’s historical fiction, I suppose, but it’s also… fantasy? Magical realism? Allegorical? A bit of all of them? The setting being «post-Arthurian Britain» means it can’t be straight-up historical, the addition of mythical creatures does not help, but on the other hand it’s not very like any fantasy I’ve ever read, either.

And then we get to the, well, I suppose we have to call it the plot. Axl and Beatrice, our main protagonists, set out from their village (where we get the impression that they are… not outcasts, exactly, but certainly on the margins) to find their son, who has moved somewhere else. A mist covers the known world, and this mist seems to make everyone forget who they are and what has happened to them. So exactly why their son is living somewhere else is not known, and Axl and Beatrice are at times wanting to find him to make up somehow and at other times seem to think that he is expecting them and awaiting their arrival anxiously.

On the way they meet various confusing situations and eventually end up travelling in the company of a Saxon warrior, a young boy who has been marked as an outcast by his village and is in the Saxon’s charge and an elderly knight, who is supposedly on a mission to slay a fierce dragon, but has been on this mission for an indeterminable length of time.

There is a portentious meeting with a ferryman. There are self-flagellating, or perhaps blood-thirsty, monks. There are guards on the lookout for the Saxon warrior. Maybe.

And there is this mist. And as it starts to lift, memories come back, but are they welcome memories?

I found it slow going at first and kept reading past page thirty or so only because it was a reading circle book. And then I was somehow sucked it and after a hundred pages it was hard to put the book down, but more from the sort of horrible fascination that makes it hard to look away from a train wreck than because I actually in any way enjoyed what I was reading.

I can see that Ishiguro is trying to say something about memory and the act of forgetting, and especially of the role forgetting plays in forgivness. Can we move on and live in peace after a horrendous war if we do not, at least to some extent, forget?

But. It doesn’t work for me. I fully accept that this might be my fault as much as the author’s. The mist that makes people forget keeps the peace, perhaps (though that is a moot point) but it also hampers any sort of meaningful progress (if we can’t learn from the past, how are we supposed to improve?). And in any case the mist is part of the magical realism-ish elements, and so this forgetfulness is not actually a) a choice or b) a realistic one if one would want to chose it. We are stuck with remembrance. And the whole ferry-malarkey is obviously an allegory of sorts, but I really don’t understand what it’s supposed to signify.

I like the novel best when it touches on religion and it’s role in «forgiveness» or «just punishment»:

«What use is a god with boundless mercy, sir? You mock me as a pagan, yet the gods of my ancestors pronounce clearly their ways and punish severely when we break their laws. Your Christian god of mercy gives men licence to pursue their greed, their lust for land and blood, knowing a few prayers and a little penance will bring forgiveness and blessing.»

(Page 151.) But that is drowned in the whole mist and dragons and Merlin and what-did-Axl-actually-do-in-the-war and why-is-Axl-and-Beatrice’s-son-estranged plotlines. Neither of which are really resolved to my satisfaction, either, but that’s by-the-by.

And I really, really hated Axl’s insistence on calling Beatrice «Princess» in every other sentence. That may have had some deeper meaning, too, for all I know, I just know I wanted to shake him each and every time.

So. I have so far abstained from rating the book on Goodreads, because I can’t make up my mind whether it deserves a «didn’t like it» one-star, a «meh, it was ok» two-star or a «well, at least it was interesting in a way and hard to put down» three-star. I might just leave it unrated.