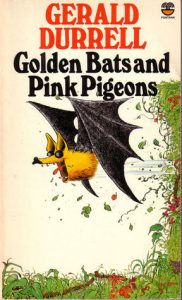 Having finished rereading (for the umpteenth time) the Harper Hall-trilogy by Anne McCaffrey as comfort-reading before Christmas, I fished about for something else that would be sufficiently engaging while also sufficiently easy to read. I decided a reread of one of Gerald Durrell’s books might be just the ticket, and rather randomly landed on Golden Bats and Pink Pigeons. It only partly fit the bill, as I was less engaged than I’d hoped (but with my reading mojo more or less dead I am inclined to blame myself rather than Durrell for this) and while Durrell’s prose is certainly readable, my edition of this book is really not well typeset. The print is small and cramped, and while not completely unreadable, certainly not easy on the eyes.

However, with possibly my only New Year’s Resolution being to make sure I read (which basically means being a little more disciplined and not choosing Twitter or TV just because a book isn’t gripping me 100 %) I did just that, so having ambled rather slowly through the first 100 pages since before Christmas I actually finished the last 50 or so in one gulp yesterday.

My preference for Durrell’s books are in order: 1. Collecting expeditions. 2. Tales from the Zoo. and 3. Familiy memoirs. Golden Bats and Pink Pigeons is type 1, and so we’re off to a good start. It is the tale of two collecting trips made to Mauritius and neighbouring islands in the 1970ies, and since I have a soft spot for the islands, especially Rodrigues, all due to Patrick O’Brian, The Mauritius Campaign and Jack and Stephen, the dears, we are not talking a hard sell.

The narrative ambles along in Durrell’s usual style, interspersing lovely descriptions of enchanting scenery and wildlife with quite hilarious observations of animals and people, including some self-deprecating humor. My edition has a postscript detailing some of what happened next with the captive breeding attempts, which is a bonus.

On this occasion I found it interesting to compare and contrast Durrell’s style with another Englishman; I was just finishing up reading Roald Dahl’s Charlie and the Chocolate Factory to my youngest at the same time. There is certainly a touch of paternalism in the way Durrell describes «the natives» and more race-centered vocabulary than feels entirely comfortable with my 2020 sensibilities. However, Durrell’s racism (if you can even call it that) is of the benevolent sort, and his zoologist instinct to describe both species and individuals in the animal kingdom spills over into the description of people (including, I haste to add, his fellow white men). Which doesn’t necessarily make things better, I know, but there you are. Dahl is a different kettle of fish, and I find it difficult to know what to do with my knowledge of his (now fairly well documented) racial prejudices while reading about the Oompa-Loompas. This time round I simply chose to ignore it, which I am quite aware speaks to my privilege. Please don’t let these reflections scare you off Durrell, though. I just find it helps me to see my own internalised racism if I attempt to name it in the books and other media I consume. Mind you, it does affirm my resolution to read less «old white men» (and women), even the ones I actually like, and actively seek out other voices.