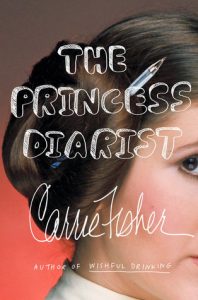 After reading Wishful Drinking towards the end of last year I was eager to read more of Carrie Fisher, and therefore I picked up The Princess Diarist in London. I got a little stuck half-way through, but I don’t think that was Fisher’s fault, as I didn’t really read anything else either.

The book oversells itself a bit on the “behind the scenes on the Star Wars set” plot (if one can call it plot in a memoir?), as there is actually very little about the actual filming. Fisher does describe how the auditions happened, which is fascinating, but the main theme of the book is “Carrison”, the affair between Fisher and her co-star Harrison Ford.

I’m not a Star Wars fan (I haven’t even seen all of the original three, though I keep meaning to), but even so I was a bit disappointed in this, partly because other people’s love-affairs (real, not fictional) don’t really interest me much. What does create interest, though, is the contrast between the young Fisher – the diarist – and the old Fisher. The former is just entering adulthood and is unsure about pretty much everything, quite far removed from the who-gives-a-fuck Fisher that has been catching my interest lately.

On the whole, though, the parts that deal directly with the events during filming are the least interesting parts of the book. Fisher’s musings on fame and fictional self are much more readworthy.

I had never been Princess Leia before and now I would be her forever. I would never not be Princess Leia. I had no idea how profoundly true that was and how long forever was.

Everything delivered in the style I recognise from Wishful Drinking, a slightly haphazard, very oral style, like you’ve sat down with Fisher one evening and she decides to tell you her story there and then. It creates intimacy, which I find charming, but also somewhat ironic, as one of the problems of being Princess Leia is that everybody feel like they already know you (and have a right to your time and attention) and now Fisher is creating a new connection to her readers/fans which has much of the same quality. However, I suppose that it might be a good thing, as this new connection is something she is in control of the contents of, as opposed to Leia, which was never first and foremost her creation.

Carrie Fisher is worth reading must be my conclusion, though I would definitely recommend Wishful Drinking over The Princess Diarist.