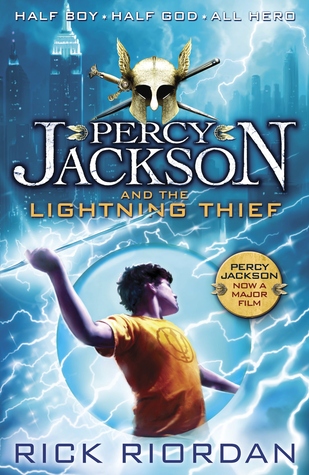 I’m a little late to the party as far as Percy Jackson goes. I’ve been meaning to give him a chance, but then there is the problem of so many books, so little time. However, a few weeks ago we were at the local dump (literally) to get rid of our was-actually-due-for-the-dump-when-we-got-it-second-hand-eigth-years-ago recliner, and when we’re there we always have a look at “Gratisbutikken”, which is basically a freecycle shop, where people leave useable stuff and other people then can take it away for free. Well, someone had been in recently and left a shitload of children’s/YA books in English, mostly fantasy, amongst them three complete Rick Riordan series, including Percy Jackson. I first started picking up just the books I wanted to read myself, but then I remembered that we have a school library which is always in need of donations of popular books, so I thought “What the h, we’ll just grab the lot.” Which is how we left the place with 12 kilos of looks-like-they’ve-hardly-been-opened books. See exhibit A:

Anyway, most of them are now with the school librarian, but I held back The Lightning Thief, the whole Cat Warriors series (on request from the ten-year-old), the non-fantasy YA and the more adult fantasy books, all of which at least one of us would like to read before passing them forward.

So, Percy Jackson and the Lightning Thief. I would assume the premise is familiar to most readers, but Percy Jackson is a troubled 12-year-old. He’s had to change schools at least once a year, and is now at a fancy (the name Yancy rhymes with fancy, I refuse to believe that is a coincidence) boarding school for delinquent youths, where he’s made friends with a boy called Grover and is on friendly terms with the latin teacher, Mr Brunner. On a school outing the maths teacher – who seems to really hate Percy – turns out to be some kind of monster who tries to kill him, but Percy instead kills her with the help of a sword his latin teacher throws him. Afterwards, though, everyone claims there was never any such teacher, so Percy wonders if he imagined the whole thing. Even after he overhears Grover and Mr Brunner talking about him, were Grover, definitely, proves he is not quite what he seems, Percy still doesn’t really accept that something supernatural has occurred. Once the summer holiday has started, though, things escalate and Percy discovers that he is a half-god (his absent father being Poseidon, one of the greek gods of Olympus) and that Zeus believes Percy has stolen his main lightning bolt and is, to put it mildly, not happy about it. Percy, Grover and a girl called Annabeth (who is the daughter of Athena and a mortal man) set out on a quest to retrieve the lightning bolt and prevent a war amongst the gods. So… not exactly a walk in the park.

I’ll probably be reserving the rest of the series at the library (since I’ve already given the others to the school). Just when I finished reading yesterday I’d have started book two immediately, had I had it available. Now that 24 hours have passed, however, the urgency has passed, and I’ve been eying my tbr pile and finding other things that I want to read more immediately.

So why is that, then? Well. Much as Percy Jackson was entertaining, I feel like I’ve read other books with the same ideas done better. The quote on the back from the Sunday Times says it’s “Buffy meets Artemis Fowl”, which I feel is short-selling poor Percy quite badly (I did NOT like Arthemis Fowl when I read it way back), even if I can approve of the Buffy-comparison. However, with the “12 year old hero and his two friends” setup, I can’t help but draw parallels to Harry Potter. It doesn’t help that Percy has black hair, Grover is kind of dorky and clumsy and Annabeth is the intellectual one, being Athena’s daughter, and a host of other details, like this quote:

Remarkable, really, the lengths to which humans will go to fit things into their version of reality.

From page 155. Which is not only familiar in its basic premise (which I’m sure Rowling was not the first to describe, confirmation bias is what you’d call it in a scientific context, for example), but in the offhand way it’s said as a sort of afterthought.

And, let’s face it, anything that reminds me of Harry Potter without being Harry Potter is fighting an uphill struggle.

Another book that came to mind while reading Percy Jackson was Neil Gaiman’s American Gods. And again there can be no contest. Much as I love Neverwhere for being set in London, American Gods is my favourite Gaiman novel, and much of it comes from the clever way it combines mythology and modern (American) popular culture. Of course, American Gods is written for an older audience, but there you are.

So, yes, Percy Jackson and the Lightening Thief is definitely readable, and I might very well read the rest of the series, but it’s also quite possible that that is one of those things I’ll never get around to.