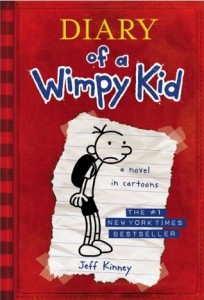 Diary of a Wimpy Kid has obviously been on my radar for a while, you have to have lived under a rock for the last ten years to have missed hearing about the phenomenon. A few years ago our oldest nephew was engrossed by it (though in the Norwegian translation), and when the eldest came home with volume 1 from the school library and finished the book in one evening (a first for her with a chapter book, a milestone worth noting), I thought the time was ripe to have a nosy and see what the fuss is all about.

And, well, I read it and I’m afraid I still don’t know what the fuss is about. See, Greg Heffley, the eponymous wimpy kid, is a bit of an asshole. He treats his (only) friend Rowley like shit, for example. Not that you don’t have some sympathy for him, middle school can be rough, but still. And while the lass was raving about how funny the book was I didn’t even smile once.

So I’m not in the target audience, not by a long stretch. Perhaps I would have found it hilarious when I was nine? Probably? Perhaps not? It’s hard to tell. But I’m not going to suggest that nine-year-olds shouldn’t read it, or that there is something wrong in nine-year-olds finding it funny. I’m even considering seeing if I can’t pick up a second-hand set of the series and donating it to the school library, if it turns out the lass is correct when she says they only have the first volume. Any book that gets a kid as interested in reading as this one seems to do is fine by me (well, ok, as long as the book in question doesn’t actively encourage harmful behaviour, I suppose). But would I suggest it to older readers? No. Not unless you, like me, like to have some idea of what your children are reading. For your own pleasure or education (or both) there is little to recommend the Wimpy Kid.

2 thoughts to “Diary of a Wimpy Kid – Jeff Kinney”