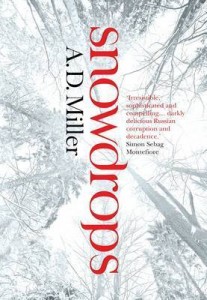 I have some catching up to do, so I am going to zip through a couple of book reviews. Well, I’ll try to, anyway. First off is Snowdrops by A. D. Miller, which we read in the book circle last month.

Snowdrops was a fairly quick read, the story was engaging, despite the fact that the narrator pretty much lacks a personality and for a long time nothing much happened.

The narrator is a British lawyer stationed in Russia, mostly because he doesn’t really have a life in Britain:

I found myself entering the thirty-something zone of disappointment, (…) The time of ‘Is that all there is?’ (…) People started running marathons or becoming Buddhists to help them get through it. (…) The truth is, the firm asked me if I’d go out to Moscow, just for a year, they said, maybe two. It was a short cut to a partnership, they hinted. I said yes, and ran away from London and how young I wasn’t anymore.

(Page 35-36) He falls in with a couple of Russian girls (and in love with one of them), Masha and Katya, sisters they say, and gets tangled up in some pretty unsavoury dealings. He is also involved in a rather unfortunate, equally unsavoury deal at work. All in all it’s a bit of a disaster and he is sent home in disgrace. Perhaps the most interesting thing about the novel is the way the story is framed, it’s written as a sort of a letter to the narrators fiance, whom he met after his return from Russia, as a sort of confession prioror to their nuptials. I can’t help thinking that the wedding will have been called off, because he really doesn’t come out of the sorry mess very well (he’s either a cynical douchebag or a pretty pathetic, naive dumbass – take your pick).

Where the novel failed, I think, is in creating the duality that I suspect the author intended. I had some sympathy for the narrator, be he ever so wishy-washy, and wanted to belive he was trying to act for the best, at least until he as so far in as to make backtacking almost impossible. However, I thereupon found myself having to remind myself that the end result of both «deals» was actually pretty horrendous. I wasn’t feeling it at all, I had to step back from the story and say «Wait, what, that is really not very nice.» Interestingly, those in my book circle who really felt how horrible the outcome was had had no sympathy for the narrator from the start (even before he’s really done anything). I should imagine what the author had in mind was for the reader to have some sympathy for both sides, so to say, to think of the narrator as a decent guy to start with and then gradually to realise (as he is supposedly realising it) what atrocities he is actually able to take part in.

The other main point that arose from our discussion of the book was how one-dimensional and distasteful the population of Russia appear in the novel. Well, there are two types of Russians, judging from this book: The scheming crooks who’ll swindle you out of your home, money and everything else, and the naive, kind-hearted souls that are there mostly to be swindled. Hardly the most flattering picture of a nation.

The best thing about Snowdrops was the occasional flash of lingustic brilliance. The quote above, especially the phrase «how young I wasn’t anymore» appealed to me, as did random sentences such as this one:

My nostrils froze together, the hairs inside them hugging each other for survival.

(Page 114) It’s not enough to save the novel, though. Not bad as such, but underwhelming, on the whole.

One thought to “Snowdrops – A. D. Miller”