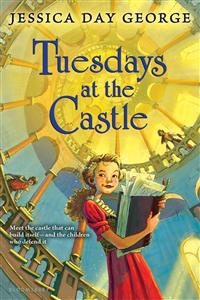 I think I first saw the title and cover of Tuesdays at the Castle on Goodreads, I know I certainly wanted to read it once I’d read the synopsis on Amazon:

Every Tuesday Castle Glower takes on a life of its own-magically inventing, moving, and even completely getting rid of some of its rooms. Good thing Princess Celie takes the time to map out these never-ending changes. Because when the castle is ambushed and Celie’s parents and oldest brother go missing, it’s up to Celie to protect their home and save their kingdom.

It sounds like a really good starting point for a cracking adventure, doesn’t it?

In some ways it is. After reading the book I am still in love with the idea of the castle, and the way it changes, taking care of people it likes and signally quite clearly when it doesn’t approve of someone.

Also, most of their rooms were significantly smaller than they had been before and only seemed to have windows when it was raining.

Celie is a charming 11-year old whom I’d have wanted as a best friend when I was her age, and her relationship with her older siblings is realistically described.

It is a delightful book all in all, but there was something that kept me from embracing it wholeheartedly. It is difficult, when writing for children, to find the right level of danger. You want to make the story thrilling and keep your readers on the edge of the seat, but not to traumatise them. Jessica Day George manages this, but not in a wholly successful way. Some of the dangers Celie and her siblings face are very serious, they suspect that their parents have been killed as part of a plot to conquer the castle. And there is, obviously, a very real limit to what sort of a fight children can put up against grown-up plots. But the story lurches from nail-bitingly scary stuff to slapstick pranks (some of the pranks, by the way, are very good), from quite precocious reasoning to rather childish behaviour, and to me the shifts do not seem entirely natural. I’m all for comic relief (did I mention that some of the pranks are very good?), but somehow it’s not wholly successful here.

That said, I’m looking foreward to reading the next installment with pleasure.