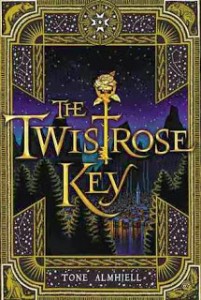 The US launch of The Twistrose Key by Tone Almhjell caused headlines in Norway: A Norwegian writer whose first novel is being published in the US before it is published here in Norway? Sensational! See Dagbladet for an example.

I was curious, of course, so I put in an order for the book. I started it briefly on Sunday, and then picked it up again on Monday. At some point in the evening, just at the time I would normally have started to head for bed, I realised I’d read one chapter too far, and that there was no hope of putting the book down again before I was done. This was on page 228, consider yourself warned. Just past midnight I Tweeted: «Just finished The Twistrose Key by @tonealmhjell. It seems I will need to write yet another rather enthusiastic blog post. #goodbook«. And then I went to bed.

The Twistrose Key reminded me of several of the fantasy novels I read and loved as a child: The Chronicles of Narnia, of course (what with the talking animals, the influence is quite obvious), Susan Coopers The Dark is Rising series and a Norwegian series by Bente Lohne which starts with the book Julias reise, to mention the most obvious candidates. Reminded me, yes, but in a good way. This is not a derivative book, the idea is original (well, as original as ideas are), even if it does involve a child walking through a portal into another world where time moves at a different speed and animals can talk. I wish it had been around in the mid-eighties when I inhaled this kind of book, I would have loved it unconditionally (I still do, but not with the fervour of my ten-year-old self).

Our heroine, Lin, has moved from her childhood paradise, Summerhill, to a rickety old house in Oldtown because of her mother’s work. She misses her friend Niklas, she misses the countryside with snowfights and she misses their troll-hunting games. Moreover, her pet vole, Rufus, has recently died. Then an odd package shows up, containing two keys, one that fits the cellar door of their rented house, and a large, old-fashioned one that looks a bit like a rose, with the word «Twistrose» engraved on it, a name Lin thought she had invented herself, the code name she would use in the troll hunt, but which she has not yet shared with anyone. So, like a good heroine, she descends to the basement and finds the keyhole (which is not really a key hole) for the twistrose key, and that opens the portal to Sylver.

In Sylver there is snow, and plenty of it, but there is also Rufus, now tall as a man and able to speak. He explains that Sylver is where all pets that have ever been loved by a child come when they die, but there is a problem, and Lin is here to help them. And so the adventure begins.

There are many reasons to love The Twistrose Key, the relationship between Lin and Rufus is one of them. They really are best friends, and I love Rufus’ dry humour, evident at the first meeting:

(Page 21.) The plotline is pretty perfect, no long stretches of boredom while having things explained at you, little peaks of thrill to keep your interest going and a big show-down at the end. The conflict is, well, I was going to say believeable, but let me say believable withing the context of the world Almhjell has created. The villain to be fought is appropriately villaineous, and the master villain has believable motivations. There is seriousness and darkness here, but not so much that it destroys the joy of the victory (which happened for me with The Girl Who Circumnavigated Fairyland in a Ship of Her Own Making, which I’m afraid I never got around to blog about). And the language is wonderful, with touches of fairytale and ecchoes of Nordic winters, among very many other things. And the book actually has an ending. Not that I don’t hope for more stories from Sylver (I want to read about Rufus and Lin exploring the lands), but it is actually quite nice to have a book that obviously has the potential for a long series but that has no obvious cliff-hangers.

Oh, and I must add a note to say how much I love the vignettes that head each chapter. Drawn by Ian Schoenherr they perfectly capture the mood of the book.

I’m looking foreward to reading The Twistrose Key with the lass in a year or two, when she’ll be the right age for it. And if you have an 8-12-year-old in your life I suggest you read them this book (if you’re allowed) or give it to them to read for themselves. Oh, and though this really is a children’s book (unlike with Odinsbarn, where I do not agree with the publishers on the designation), it is the sort of children’s book that can, and should, be read by adults for their own pleasure.