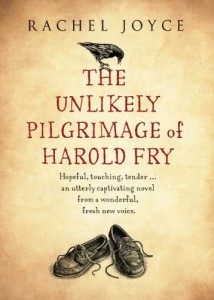 The Unlikely Pilgrimage of Harold Fry jumped the tbr-queue a bit unexpectedly. I borrowed it from my parents, who both read it this summer, and it therefore happened to be on top of a pile in the bedroom when I needed something to read while keeping the baby company until she fell asleep. Once I started, I was intrigued enough to promote it to main read when I had finished Mutton, and since I spent Friday flying to Oslo for a meeting, I had a lot of time to read (one good thing about meetings in Oslo).

I say I was intrigued, and I was. Harold Fry lives with his wife Maureen in Kingsbridge, their marriage has been pretty much dead for twenty years. One morning he receives a letter from Queenie Hennessy, and old friend, who is dying of cancer in Berwick-on-Tweed. Harold is shaken by the news, especially as he feels he has things unsaid to Queenie. He writes a letter, and walks to the postbox to post it, but somehow he can’t quite manage to get it into the first one, nor the second one and at the edge of town he encounters a girl in a petrol station who talks about faith curing cancer and Harold has somehow started walking to Berwick-on-Tweed in order to save Queenie. This is the pilgrimage, an old man in unsuitable shoes, without his mobile, walking from Knightsbridge to Berwick-on-Tweed. A mad project, if ever there was one.

Well, there’s naught the matter with mad projects, fictional or otherwise (Round Ireland with a Fridge, anyone?), and one of the more enjoyable features of Harold’s project is the conversations he has along the way. He also has a lot of time to think, and we get flashbacks of his life, his friendship with Queenie, his relationship with his wife, his less-than-perfect parents and his son. Maureen, with her husband out walking to save another woman also has time to think, and so we get her side of the story, too. And it’s interesting enough, as things go. And there are nice turns of phrase, too:

The world was made up of people putting one foot in front of the other; and a life might appear ordinary simply because the person living it had done so for a long time.

(p. 180) However, I’m not quite sold on the whole thing. I can’t put my finger on it, but Joyce doesn’t really make me care. I am nowhere near tearing up at any point, and really, there are several places where I should be breaking out the Kleenex (I mean, nowadays I cry at ANYthing, NOT making me cry is almost impressive in itself). So, well, a quick and somewhat interesting read, but not really something I’d recommend whole-heartedly, I’m afraid.

Another quote, though, this is Harold and Maureen’s neighbour Rex talking about his dead wife:

I miss her all the time. I know in my head that she has gone, but I still keep looking. The only difference is that I am getting used to the pain. It’s like discovering a great hole in the ground. To begin with you forget it’s there and you keep falling in. After a while, it’s still there, but you learn to walk round it.

One thought to “The Unlikely Pilgrimage of Harold Fry – Rachel Joyce”