I’ve had The Sandman on my wishlist for a while, and got some for Christmas 2011 (which I read at the beginning of 2012, but neglected to blog about) and two for Christmas 2012. However, I had to exchange one because I goofed, I put vol. 3 onwards on my wishlist, but I already had 3. Luckily, Outland were nice about it and let me exchange vol. 3 for vol. 5, so I have now just finished vol. 4 Season of Mists and vol. 5 A Game of You.

Every volume I have read so far is beautiful in its own way. The cast of characters, both the recurring ones and the ones who appear in only one storyline, are by turns electrifying, charming, terrifying and lovable, but always fascinating. The themes are far-reaching and open ended, leaving more questions than they answer. Gaiman borrows lavishly from pretty much every mythology, and puts his loot to good use.

And on top of that the illustrators do their job beautifully throughout.

In Season of Mists, Dream of the Endless accidentally (sort of) aquires the key to hell, and much chaos ensues while he tries to figure out what to do with it. Along the way we get chilling images of boarding school life as well as philosophical musings on the role of hell and humankind’s need for punishment. 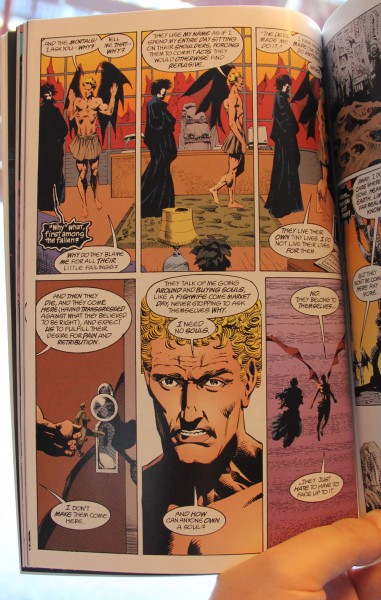 A Game of You appeals to me even more, with its captivating set of somewhat lost humans getting involved in something far beyond their conscious imaginings.

It’s hard to say much more without spoilers, I find. I’ll leave it there.