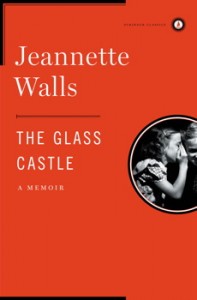 The Glass Castle was the April pick for my book club, so it’s been a while since I finished it, but I didn’t want to leave it completely unmentioned here on the blog, despite not having felt the blogging groove lately.

I found Walls’ story utterly fascinating. She describes a highly dysfunctional family, but does it in such loving terms (even when she’s obviously angry and frustrated, she never sounds bitter). Perhaps it’s easier to forgive incompetent parents when they despite everything they don’t provide, at least provide you with plenty of spunk, a curiosity about the world and belief in yourself?

Suffice it to say that I’ll be seeking out Walls’ other books. 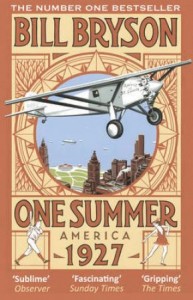 Trying to get through the backlog, so this will be short. Though, looking back, not as short as my review of At Home which read in its entirety: “If anyone can tip me off about other authors who are as good at collecting, organising and relating anecdotes as Bill Bryson, please, please do.” Which is pretty much true for One Summer as well.

What can I say? Bryson has picked an interesting year and presents interesting stories in interesting ways. His anecdote-collecting skills have not waned and besides the usual suspects (Babe Ruth, Charles Lindbergh, Al Capone, Henry Ford, Calvin Coolidge and Herbert Hoover, amongst many others) are lots of people I’d never heard of (well, ok, that might not say much, but bear with me) with stories that are definitely worth hearing. Such as Carrie Buck, who was sentenced to being sterilised on the grounds that both she, her mother and her daughter were “imbeciles”, and that they should not be allowed to reproduce. On the whole the chapter on eugenics is particularly chilling, perhaps even more so with hindsight, knowing what was to come in Europe a few years later (mind you, some of the atrocities carried out in America, such as agains Carrie, were bad enough, even though fewer people were affected).

Ending on a happier note, I quote:

When tabloids became the rage, Macfadden launched the Graphic. Its most distinguishing feature was that it had almost no attachment to truth or even, often, a recognisable reality.

(Page 51.) Much like some of our more popular tabloids nowadays, then.

Factotum was on our book circle summer reading list, so it’s been a couple of weeks since I finished it, but it takes a while to get around to blogging, obviously.

Factotum is surprisingly readable considering the synopsis is “Henry Chinansky travels around the US, being regularly hired and fired all the while constantly drinking and having quite a bit of sex.” I mean, really. That’s the plot.

As usual Carmen was wearing a very tight knitted dress that fit her like a balloon fits the trapped air, maybe tighter.

(Page 68) Much of the charm has to do with language, of course. There are little nuggets of beautifully formed thoughts throughout the book. I found it hard to pick just one or two for this blog entry, so you get a slew of them

He jumped up on the dusty seats, began walking along ripping out old posters with his can opener. So that’s how those things get up there, I thought. People put them there.

(Page 27) This is not life-changing literature. Well, not for me, anyway. But despite Henry hardly being the sort of person you’d trust with… well, anything, really, and despite having more than a little sympaty for his father who insists Henry pay rent and board while staying “at home” for a stretch in the book, it’s hard not to like him.

The problem, as it was in those days during the war, was overtime. Those in control always preferred to overwork a few men continually, instead of hiring more people so everyone might work less. You gave the boss eight hours, and he always asked for more. He never sent you home after six hours, for example. You might have time to think.

(Page 38) And though the hiring and firing gets a little repetitive, the insight it offers into the unskilled, odd-job market is interesting. Most of the time Henry is quite deservedly let go, but occasionally he is fired through no fault of his own, and those occasions serve to illustrate why, perhaps, he cares so little about trying to keep any job. He seems  to think that sooner or later he’ll be fired anyway, so why bother actually doing a good job, and to some extent he may be right.

I always started a job with the feeling that I’d soon quit or be fired, and this gave me a relaxed manner that was mistaken for intelligence or some secret power.

(Page 99-100) If the book has a fault it’s that it sort of peters out at the end. Henry doesn’t get a job as a writer and get his act together, neither does he die in squalour of alchohol poisoning. There you are reading about Henry drinking and losing another job and then on the next page the book ends. No closure, so to say.

Still, I rather enjoyed it.

We somehow started talking about Steinbeck on Saturday, and I promptly picked a few of his novels down from the shelf in order to remember to read them. I started this week with Tortilla Flat – the others may have to wait since I have a few bookring books to get through.

Tortilla Flat is about the Paisanos of California. More specifically it is about Danny, who, on coming home from the war suddenly finds himself the owner of two houses. Having been a slacker all his life he feels the burden of property keenly, but giving shelter to his band of friends, Pilon, Jesus Marie, Big Joe Portagee, Pablo and the Pirate, helps to (mostly) dispel the gloom. The friends only work when there is a specific need for it, most of the time they survive by stealing or begging for scraps. When they can get hold of wine they get gloriously drunk and most of their days are spent lazing around on the porch in the sun. They are a likable bunch, despite their tendency to regard other people’s property as fair game, and I have a feeling they’ll stay with me.