And then, when I get around to reading it (and I’m putting it on my to-do list for tomorrow) I’ll post the link to the story about the last late-term abortionist (in the states). Because, you know what? I’m not actually “in favour of” abortion. I just happen to think that the one person qualified to decide whether a pregnancy is to come to term or not is the pregnant woman.

Taking a break from the quilting posts to do an excercise, inspired by this post by Tami, read more about how (and why) in this article.

But then, I’m white, cis-gendered, heterophile, able-bodied, educated with educated parents. The only thing I’ve got against me is being female, and I happen to live in one of the best countries in the world in terms of gender equality (though it’s still not perfect by any means). So I guess I knew that.

And helping someone else at the same time? What could be better. And there’s the perfect opportunity just now. Go to Iraqi Bundles of Love and read about the project and then leave a comment to get the mailing adress. There is now a European mailing adress, too, so we don’t have to trasport things backwards and forewards across the Atlantic.

I’ve been doing a lot of laughing, in an exasperated sort of way, over the last few days. See, this woman called Hanne N. Herland has been figuring in the Norwegian media for stating the – uhm – unusual* opinion than women should be good little wives and please their husband sexually and gastronimically and be happy about it (oh, and don’t forget to freshen up your makeup before he arrives home from work and greet him with a smile). She also said that it’s no wonder Norwegian men marry Russian or Thai ladies because at least these ladies like sex and can cook. Apparently. Also, Norwegian ladies are all hedonist and jump into bed with just anyone, especially their friends’ husbands. Why they would chose to do so if they don’t like sex hasn’t been explained yet, I’ll get back to you on that one.

So I chose to laugh.

Then some other ladies chimed in to say that really, all this equality-talk has gone too far and how it’s a shame that young women nowadays have to work full-time AND take care of the house and children.

Let me tell you something, ladies: That ain’t equality. The idea, you see, is that your husband should do his share of taking care of the house and the children. I know, revolutionary, isn’t it?

Anyway. I laughed some more.

And then, this afternoon, Herland participated in a net-meeting,  and got the following question:

And Herland offered this gem:

Which is when I stopped reading.

(To enlighten those of you who don’t read Norwegian, the question asks sarcastically how she intends to get back to pre-war times where she obviously belongs. She answers that she thinks there are a lot of good things to be said for the 1950-ies.)

Now Herland, I realise there have been wars since 1959, but generally, when one refers to pre-war in Norway, one is talking about the 30ies, as WW2 is THE war hereabouts. Not that there isn’t a lot to be said for the 3oies, too. But as far as being a woman goes, I for one am grateful I was not around then.

This, however, this just makes me cry:

A 63 year old man has been sentenced to five months in jail for sexually abusing an eight year old girl. However, the court did not accept the girl’s claim for compensation, and has instead ruled that the girl must pay the abuser’s legal fees.

In what possible light can this be seen as “justice”?

Stealing my title from Shakesville (see Assvertising), but, really, how else to describe this? 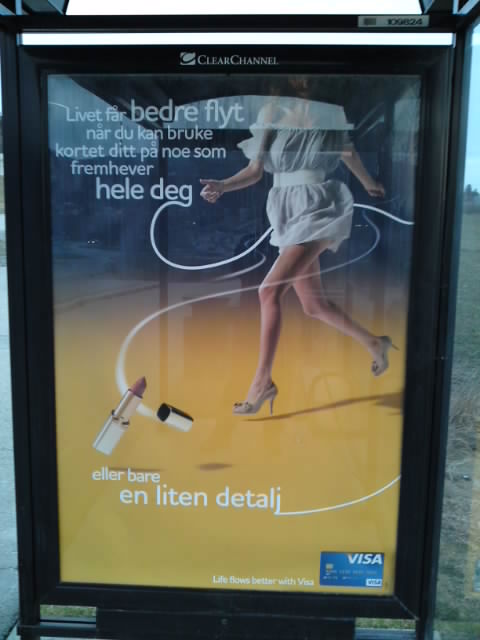 Mind you, it fits nicely in the series: Today in disembodied things, too.

The text reads: “Life flows better when you can use the same card for something that highlights the whole of you or just a little detail.”

The whole of you? Really?

Note to advertisers: Most women have heads. I think – I might be wrong here, but I’m willing to chance it – it might be just ever so slightly difficult to get along without one.

Or just a little competence.

Oh, the fail, the fail – or as Henry Higgings would have it:

Poor Eliza. How simply frightful!
How humiliating! How delightful! 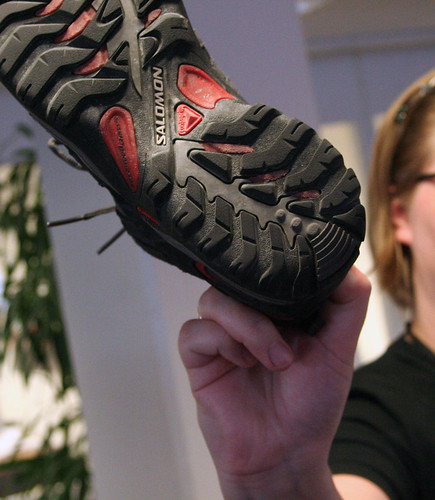 …I am suddenly reading toy catalogues again. And I am increasingly frustrated by the pinkness, princessification and general gendering of toys. A post by Lauredhel at Hoyden About Town last year caught my eye, therefore, and I have been applying the Lauredhel’s Toy-catalogue Annex of the Bechdel Test ever since. With depressing results, I may add.

To play, try to find:

1. One or more girls, playing;

2. with no boys around; and

3. with something that is not related to domestic work, mothering, being sexy, or ponies.

Before Christmas I did a double take at an ad from Clas Ohlson in the paper. It contained about a dozen images of products, with only one person used for illustration. The person: A blonde girl of around 9 years with a skirt. The product she was advertising? This: 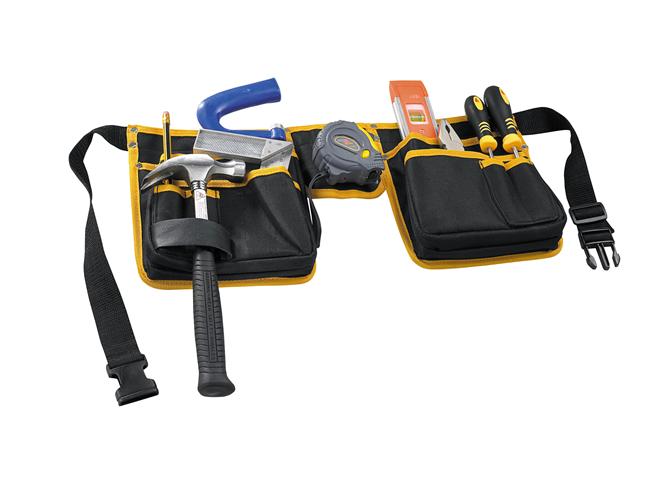 It’s not even a toy, as such, they’re real tools, kiddie-sized.

I meant to save the newspaper page, but forgot. However, I got the Christmas catalogue when I bought muffin tins at CO the other day, and lo and behold, the same picture is used. 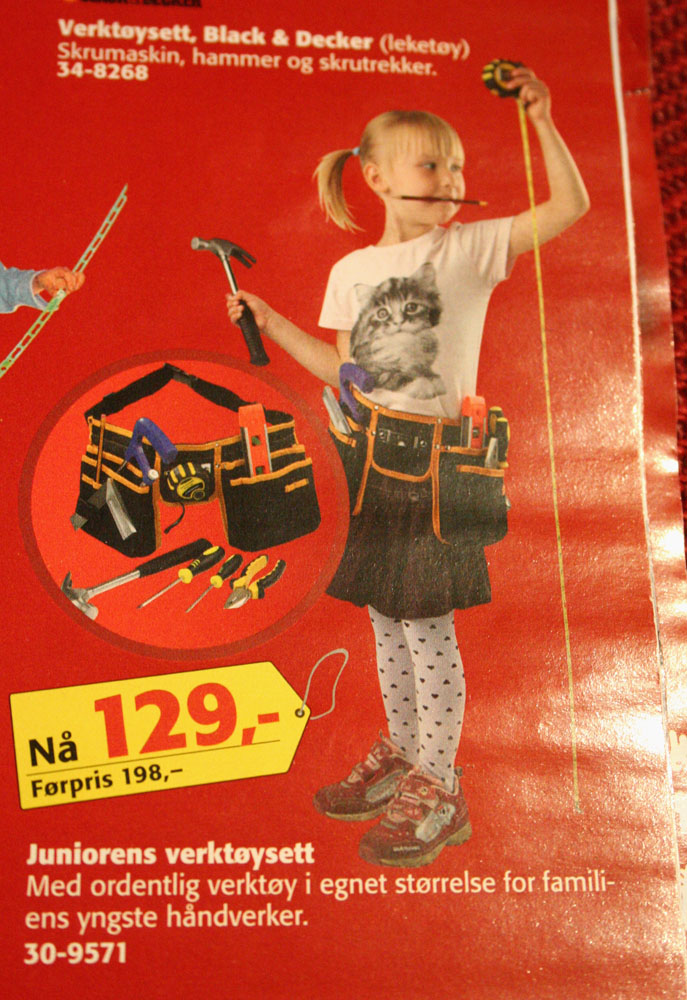 Granted, on the catalogue page there is also a picture of some boys, but they are quite clearly advertising something else and not part of the same picture at all. 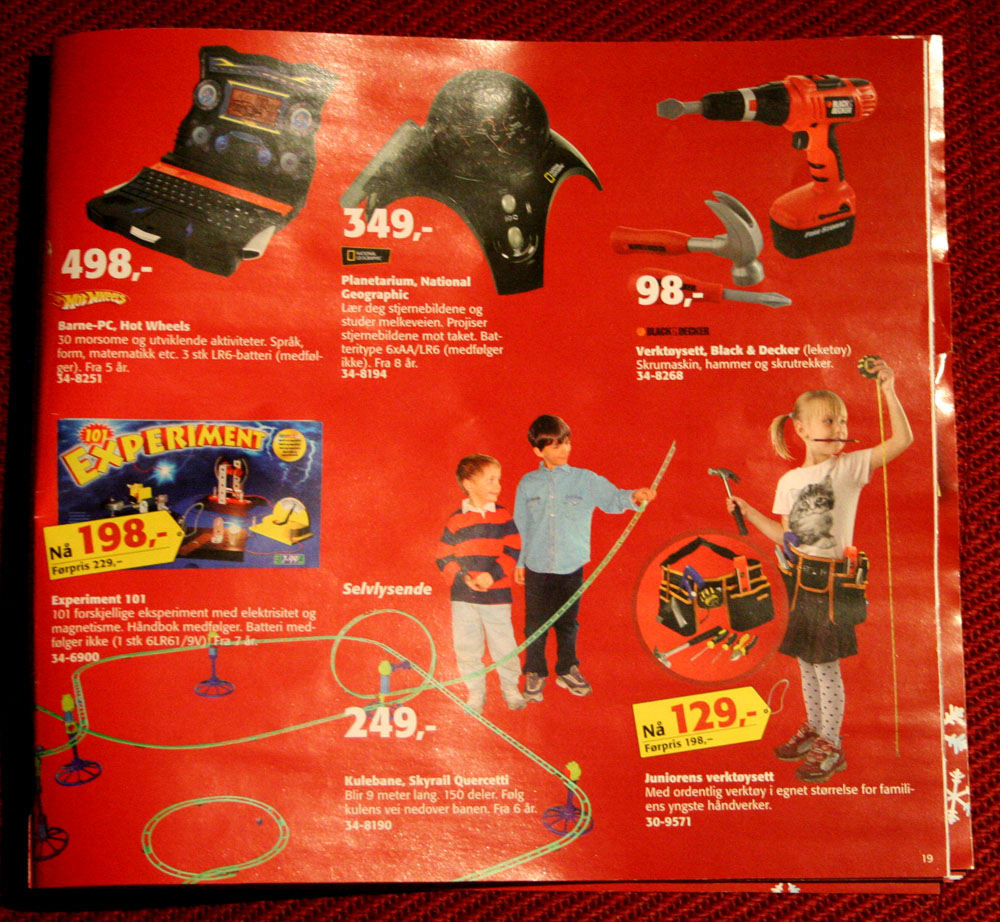 The sad thing is that this should be so unusual as to warrant comment, of course. Also, surely a denim skirt is not the most practical choice of apparel for a wannabe carpenter? But who am I to dictate what carpenters should wear?

Babyslime posted a YouTube clip (and I can’t for the life of me get it to embed without messing up the layout), and says “San Diego’s republican mayor has a change of heart on gay marriage – this conference that he held, explaining what had changed for him, is so incredibly moving. It’s long, but it’s worth it. I cried a lot.” Which is pretty much what I’d say too. Watch it.

Now, personally, I don’t (as far as I know) have any family members or close friends who are “members of the gay community” (not anymore, there are a couple in the vast group of people I’ve lost touch with, though), and it would be nice to see a politician have a change of heart simply because (s)he’d thought about it properly and come to the conclusion that it IS discrimination and it IS unfair and what the world needs more than anything is LOVE so why bother about the whom, where and wherefore? Still, a change of heart is a change of heart and daring to do the opposite of what you said when you were elected when you know a lot of your supporters are really not going to like it is quite admirable. It made me hum the line “What kind of father might hate his own daughter if she were gay” – watch (and listen) here if you don’t know the song – and that is something I ask myself whenever people argue against homosexuality.

– If the parties that make up our coalition government were in agreement all the time they wouldn’t need to be three parties. Could the media please stop trying to make a mountain of a molehill? (No, I guess not.)

– If Ingrid Betancourt doesn’t want to talk about her experiences as a hostage, perhaps she ought to stop saying yes to appearing on talk shows? (Or: What the f was Grosvold supposed to ask her? “So, uhm, which celebrity would you most like to have sex with?”? No, I didn’t watch the show so I don’t actually have any idea of what I’m talking about.)

–  Best line ever on Nytt på nytt this evening and now I’ve forgotten what it was. I might have to watch it again online just to find out.

– Does anyone (outside his and her immediate circle of family/friends) actually, seriously care that Peter Nortug has a new girlfriend?

– NaBloPoMo didn’t quite work out for me, did it?