I spent yesterday evening obsessively reading my Twitter stream, checking facebook, nrk.no and aftenposten.no occasionally to see if I’d missed anything (I hadn’t. Twitter was by far the most up to date source of news yesterday). I passed a milestone by turning on the news despite the kid being awake, in the room and not too preoccupied to watch with me. Mercifully they’re too young to really get it, they were most interested in the ambulances, focused on how they were helping people, not registering the talk of those who were beyond help.

When I went to bed the casualty list was at 7 in Oslo, 9 or 10 at Utøya. I suspected the numbers for Utøya would rise, from what I’d read on Twitter the situation was bound to be chaotic, but I fervently hoped not, thinking “How many people can a lone gunman hit?”

I woke up to official numbers of “at least 80” killed at Utøya. The answer to my question, therefore, was obviously: “Way, way too many.”

First of all I’m grateful that my nearest and dearest are safe and sound, of course.

And I’m grateful that the Norwegian police seemed to handle everything pretty much perfectly. Their responses to the press have been exemplary (not so all the questions from said press). They obviously had plans to handle a much worse situation (I know it might be diffucult to imagine the situation being worse just now), getting people out of all suspected targets, telling people to remain calm, but to get out of the centre of Oslo and to avoid big gatherings. If there had been a series of bombs rather than just the one, their response would have been the only correct way of handling it. This is reassuring. We can’t avoid madmen completely, at least not without becoming the sort of society it wouldn’t be worth living in, but we can minimise their impact.

I’m also, though it might sound strange, grateful that the perpetrator seems to have been a right-wing fundamentalist rather than a muslim fundamentalist. It makes the horror that was yesterday no less terrifying, but it may make the reactions to come less horrible. Yesterday there were already plenty of reports of “muslim-looking” people in Oslo being hassled, or even physically attacked. It is to be hoped that that idiocy is curtailed now.

And I am profoundly grateful that the reaction from the Prime Minister, and from everyone else who really matters, has been – throughout, also when the perpetrator(s) were unknown – to keep calm, to stand together and most of all to not let fear rule our actions. Democracy – the principle that everyone is entitled to an opinion and is to be allowed to state that opinion – is one of the things that make our society great. Though, as it turns out, this is not “our 9/11”, it’s more like “our Oklahoma”, still the contrast in the reactions from our leaders expressed on Twitter and Facebook this morning is not without significance:

The AUF leader has already expressed the opinion that the camps at Utøya should continue every summer, in defiance of one maniac’s wish to stop them. I hope they do.

Links, quotes and other stuff I’d like to keep track of:

Jo Nesbø in English in the Guardian.

Because, frankly, celebrating seems a little wrong to me.

I’ve been reading reactions on twitter today, and though I feel something akin to relief, I also find it diffucult to find joy in another human being’s death. I found this tweet from boywithredwings sums it up best so far:

A monster is one who takes pleasure in the death of his enemies. A monster is dead. Take great care in how you respond to that news.

That said, I find reading twitter easier than reading traditional news media. Twitter offers rather more in the way of dark humour, which is a good thing in my opinion.

And I couldn’t help smile at the trending topics just now: 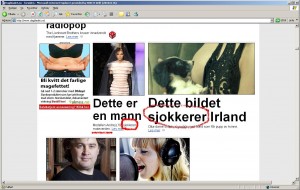 – If the parties that make up our coalition government were in agreement all the time they wouldn’t need to be three parties. Could the media please stop trying to make a mountain of a molehill? (No, I guess not.)

– If Ingrid Betancourt doesn’t want to talk about her experiences as a hostage, perhaps she ought to stop saying yes to appearing on talk shows? (Or: What the f was Grosvold supposed to ask her? “So, uhm, which celebrity would you most like to have sex with?”? No, I didn’t watch the show so I don’t actually have any idea of what I’m talking about.)

–  Best line ever on Nytt på nytt this evening and now I’ve forgotten what it was. I might have to watch it again online just to find out.

– Does anyone (outside his and her immediate circle of family/friends) actually, seriously care that Peter Nortug has a new girlfriend?

– NaBloPoMo didn’t quite work out for me, did it?

Mr. soon-to-be President. May you acomplish all you imagined you might be able to do, and have fun doing so.

And congratulations to you, the people of the United States of America. You did the right thing. I am profoundly grateful.

Edit: You need to read this and this (via – yes, they made me tear up, too. Sentimental sap that I am.).

Another edit: Not all the news are good, though.