Well, I’ve been doing some cleanup and some things intended to ease a bit of a restructure here. I may, in the process, have broken something, but it seems to be working.

Anyway, the plan is to substitute the main page with a more static one that points to this blog, the bookblog and my other projects (such as drikkelig.no). Since I hardly ever publish anything here, but maintain the bookblog semi-regularly, it seems silly to have this as the main focus of the site. I might even figure out how to, say, include the last post from each of the blogs on the front page. Maybe.

Ok, so, I know it’s the 2nd. But I did post yesterday, it’s just that I posted on the bookblog and on the ingestibles blog rather than here. I’m going to say it counts, though.

So, I’m not going quite as crazy as tonbel and doing the NaNoWriMo, though every year when it comes up I think “well, maybe next year”. So, maybe next year. But I think I can do NaBloPoMo, as I’m in a bit of a blogging groove or something (I mean, when’s the last time I wrote as many blogposts in a month as I’ve done this October?). One thing, though: By now, shouldn’t it be IntBloPoMo? It’s hardly a “national” phenomenon anymore, is it?

Wait, ok, just to be completely crazy – or possibly bite over more than I can chew, I’m going to post the ingestibles blog to the blogroll, too. That’ll be fun. Yeah.

Bloggers I read regularly who are also doing it (will add to this list as I discover more…):

I have decided to merge the hobbyblog with the “main” blog. Considering how often (or, more accurately, how infrequently) I post to either, having them as two separate entities seems rather pointless. The crafty entries are hereby imported, and I will be adding to them here from now on. This also means I’ll probably be writing about craft mostly in English from now on. I’ll leave the previous entries in Norwegian, though – please ask if there is anything you’d like to know about them that you can’t figure out from the pictures.

Now, what am I working on right now? Well, various bits and pieces. The one main thing I really need to get going with is the digiscrap pages for the 2008 photo book. Having set a precedent last year with a photo book for Christmas for the grandparents and great grandparents, everyone is obviously expecting a sequel, and I have made – ahem – two pages so far. Yes. Two. Single pages, too, not two-page spreads. Last year I spent pretty much every evening in November in front of the computer speed-scrapping. This year, well, it looks like a repeat… Good thing I work well under pressure. Well, that’s what I say at interviews, anyway. I suspect a more truthful statement would be that I only work under pressure. However, let’s not go into that. 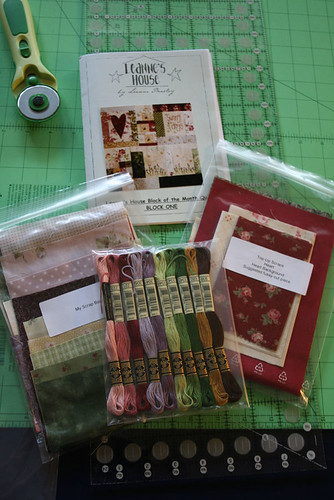 A work in progress, with a picture, no less – though not pictures of any actual work, as I forgot all about taking pictures once I got going – is the first block of the BOM (block of the month) quilt called Leanne’s House. The designer blogs at, you guessed it, Leanne’s House. I’m receiving my packages from Buttonberry, hence they are responsible for the choice of fabric. I will, however, be buying some supplementary quarters, as the quilt will only be 55″ x 55″ once done according to the pattern, and I will want to extend it a bit. Quite how I haven’t yet decided, I might repeat a few blocks – with variations, or I might make a stripey part at the top or bottom. In any case I wouldn’t want to bring in wholly new fabrics at that stage, so I need to start mixing them in as I go.

Btw: I am SO doing a Butterfly Garden in black and white with orange butterflies. Just look at it!

Well, I thought I might as well. But now I have a gazillion categories. I need to think about organising all this in some sensible way. In the meantime, feel free to use the search function if you’re actually looking for something specific…

Jepp. Ny bloggingsoftware. Out with the old, in with the new. Fortsatt like språkforvirra, men det løser seg jo ikke over natten.

Just for now, most of the old content will disappear. Some or most might reappear later, I just need to decide which bits I actually want to keep.

We apologize for the inconvenience. Or not. It’s my site, after all, I can do what I bl**dy well please.