We have an addition in the office:

This desk has been in my parents’ house for ages. It used to be in the dining room while we lived in Hamar, and lately my father has been using it for his laptop when working at home. I remember that we got it from someone in  the family way back when, but I can’t remember who, or why, or exactly when that was. I need to get some details from my father, I guess.

However, it is old enough. The colour is rendered pretty accurately in these pictures. It’s not really practical, which is why my father didn’t want it anymore. I don’t really have any plans for using it yet. In fact, I was all set to store it in the basement for the time being, when the husband suggested we might as well have it upstairs.

So. It’s not practical. The ground colour is – well – hideous. And I can’t really paint it, since I want to keep the rosemaling, even if it’s (probably) not the most impressive example. Still, it’s got history and it holds memories for me personally. It stays.

Note the yellow poster, by the way. My mom left a few bits and bobs in one of the drawers, mainly scrap paper and such, thinking the lass and I might find use for it in crafting projects. Among them was this poster. It says: “Not ready for cleaning.” I threatened to get it laminated and hang it on the front door any time my mother or my mother-in-law comes to visit…

To fit the writing desk, we had to move a tall chest of drawers (which were not meant to stay in this room anyway), and there was suddenly space to hang my type case. I found another one recently, which turned out to be perfect for displaying regular size minifigs, but not so good for the Toy Story characters I recently aquired.

Which gave me the idea that perhaps this desk would be the perfect Lego-building site. We’ll see.

Saturday afternoon we visited IKEA. Since there were a few specific things on our list, we started in Rotekroken – the section with all the stuff that’s been displayed or returned and is being sold at reduced prices.

And what do you think we found? A limited edition Billy bookcase, that’s what. 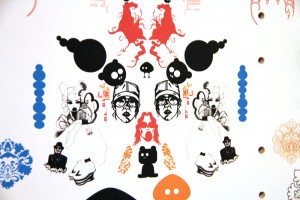 Billy is 30 years old, and to celebrate, a special edition was designed by IKEA designer Annika Bryngelson. They were supposed to be available from 1 October, but we haven’t been able to find them. And though we are sticking with boring old oak in the living room, we thought one of these would be perfect in the craft room to hold comics. 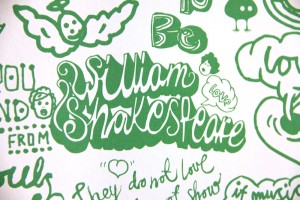 Though it would work for Shakespeare, too, I guess. And we sure have a few volumes to host with his name on them, too. 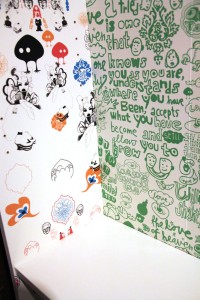 I love it. It came with shelves, by the way, but we had to remove them to get it home, and haven’t put them back yet. All in all we were pretty happy just to find the darn thing, but the best thing? The price:

I don’t know what’s up with that. I’m pretty sure the “was” should be the same as standard Billy, which starts at 365 kr for the plain white. You won’t see me complain, though.

Oh, and three steps down we found another Billy, this one in oak, which was one of the things on our to-buy-today-list. Nice.

The inlaws came by last week to “see how far we’d gotten”. Well, I suppose the conclusion was “not far”. We’re ok with that, though, we plan on living in this flat “forever” and so we feel we have time to work out how to get it right, to find out what works and what doesn’t.

My mother-in-law would probably lose her mind in a very short time if she had to live in our flat the way it looks now, though. So would my mum, come to think of it. We’re ok with that, too. They don’t have to live there. We do, and we’re comfortable in stepping around and over boxes for days, weeks and months before figuring out where the contents go – or having the energy to put them there.

There are other things we don’t see eye to eye on, too. My mother-in-law thinks the brick walls (which we’ve discovered are actually tiles made to look like bricks) look nice. We said she could have them. My father-in-law expressed, the last time they visited, the opinion that we should try to keep the amount of bookcases in the living room to a minimum. Yeah, that’s going to happen.

At the start of the visit it became abundantly clear that the current seating arrangements in the living room, though fine when it’s just the three of us, is not really adequate for visitors. Well, I say “arrangements”, it’s more a “where the sofa and chair happened to be put down” situation. I commented on the fact that there was really no place for them to sit and that we’d have to think about a solution. My mother-in-law suggested that what we needed was a corner sofa. Or another sofa, I suggested, so we can make a corner. Well, yes, but she really thought a nice corner sofa would be best. Yes, but then what would I do with my beloved sofa, I wondered, as I want to keep it. Well, we could just shove it into one of the bedrooms, in her opinion. I explained that this was not happening, since we have plans for the bedrooms which do not involve a spare three seater.

I’m pretty sure she wasn’t convinced, but then she doesn’t have to be, I suppose.

This is my sofa. I love my sofa.

I purchased it at a flea market in Oslo for 200 kr, and paid another 300 to have it delivered. It was worth it, I lived on the fourth floor, no lift. It is incredibly comfy, the material is obviously hard-wearing, it’s just long enough to sleep on, I think the shape is cool and I adore the colour. It’s also pretty much the perfect length for the husband and I to sit at either end and play footsie in the middle.

Lately, it’s been the husband’s seat more than mine, I’ve sat in the various chairs we’ve had after we moved to more than 32 square meters. But I still love it.

So now I’m surfing for new sofas, starting with finn.no. I guess we’ll be holding our eyes open at flea markets, too. And we’ll get one the husband likes, then he can have that and I can have mine “back”.

The main problem is getting one that fits the requirements: Comfy, at the right price and not butt-ugly. At best it would go with the other one, but that might be a bit too much to hope for. But I draw the line at butt-ugly. And since I think 90% of all sofas are butt-ugly and a fair few of the ones that aren’t are quite impossible to sit comfortably on, we might be searching for a while.

I got some art up on the wall in the kitchen. This wall is concrete and h*ll to make new holes in (we had to to anchor the whisky cupboards on the other side), so I just used the nails the previous owners had left. It works, though I would have rearranged the pictures (and lined up better) if I could do so easily. As it is, I suspect this is how it will remain.

The artwork is by various Trondheim-based comic book writers/artists (most by Mads Eriksen), and was purchased a few years back at an event in aid of a local comic showcase magazine. The husband had to work quite hard to convince me to stop at four, as they were (I thought) ridiculously cheap. The two in colour went for 300 kr, as far as I can remember, with the b&w ones going for less. Bargain!

The table and the one chair you can’t really see are inherited. My brother-in-law and his fiance had it before, and they painted it this dark blue colour, which is quite nice. However, especially on the table top it is quite worn by now. Also, the set (we had five more chairs, after some breaks I think we have four left) are originally teak (or at least teak-coloured), and I’ve been meaning to try paint stripper on one chair since we got them five years ago. Perhaps I’ll get around to it someday… They badly need recovering, anyway, so it would make sense to do both.