Before Christmas, on the 16th to be precise, I realised that there was to be a “nissefest” at the lass’ daycare the next day and that the only red garment she had was a pair of red tights, and those technically outgrown to boot.

A note on the concept “nisse”. Well, a Norwegian word of the day, if you will. Nisse is a noun, and can mean Santa Claus, but is as likely to mean something akin to gnome. That is, in the Scandinavian tradition, the nisse would live on the farm, unseen, and if treated well would care for animals and people, but if treated badly could really make trouble. Even those nisse that were treated well were fond of pranks, though. One of the things you should absolutely on no account fail to do if you wanted to keep your nisse happy was to leave out a portion of rice porridge on Christmas eve. These nisse are traditionally depicted with red hats, but normally wear a greyish knitted sweather and felted wool pants rather than the whole red get-up.

So when daycare have a “nissefest” the idea is that the kids dress up as little nisse, but they will also, most likely receive a visit from Santa Claus, so it’s all rather mixed up. Anyway, some sort of appropriate dress was expected, and I didn’t even have any idea where our red Christmas hats are (we have at least two, somewhere).

While searching for the hats, though, I found a long sleeved t-shirt that the husband got to wear at work last Christmas. Plenty of material in that, I thought and got to it:

Notice with the arm that I’m reusing the hem at the bottom of the original shirt, I also reused the neckline rib-finish in the neck of the dress. The less seams I have to sew, the better, especially when it’s a last minute rescue mission sort of project.

The result was pretty good, even if I do say so myself:

The skirt is made from the bottom of the shirt, which I simply pinned on in four places with the same amount of fabric between them and pleated while sewing (also stretching the top part to create some natural pleats). The ribbon is there to hide the name om my husband’s employers which was printed on the front. On the back is printed “Merry Christmas” in quite large letters, which I left as is, it’s supposed to be a Christmas dress, after all.

I have to use one of these: 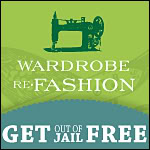 Because I purchased two dresses this summer. One for wearing to a wedding and one because I found that first, and really liked it, so caved, but I couldn’t wear it to the wedding because it was black. So. Both dresses were on sale, though I’m not sure I really think that helps. (Well, it helps my finances, obviously, but not the “do not buy new clothes” angle.)

But the dress was sleeveless and, well, Scandinavian summers can be a bit unpredictable, so I decided I needed a bolero. And I had two of these tops in my wardrobe, one grey and one purple. 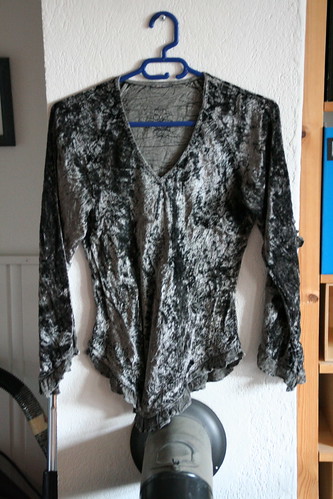 As they were too short for me in any case, and what do I need two pretty much identical tops for anyway, I chopped and spliced a bit on the purple one and got a bolero. 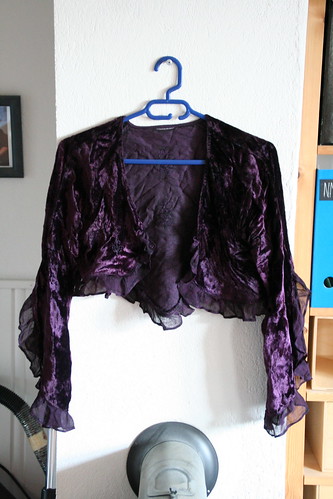 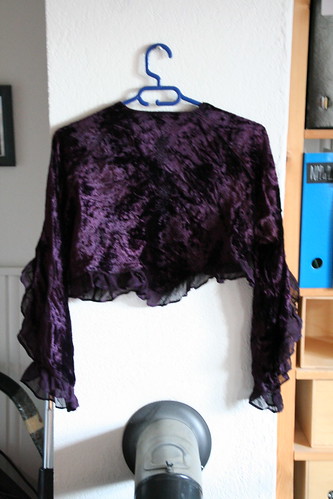 What I did, if you’re interested, was to cut off the frilly bit from the bottom, then cut a reasonable bolero shaped bottom hem free hand then sew the frilly bit back on. Very simple, but very effective, and frankly it looks much better on me as a bolero than it ever did as a top.

I love this long-sleeved tee, but it’s too short for me, so I thought I’d try the adult-arms-to-toddler-legs method, and I made a tee from the body to complete the set. I tried to utilise the existing hems whereever possible. I think this is going to be great for hot summer days – whenever they return. Temperatures plunged this week, so it feels like early March again right now. 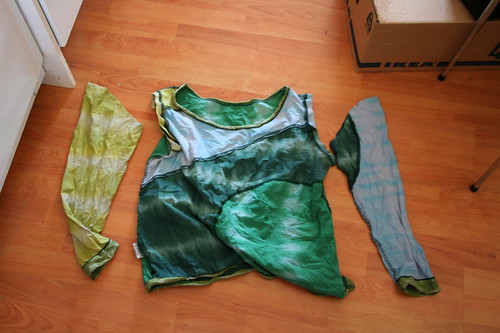 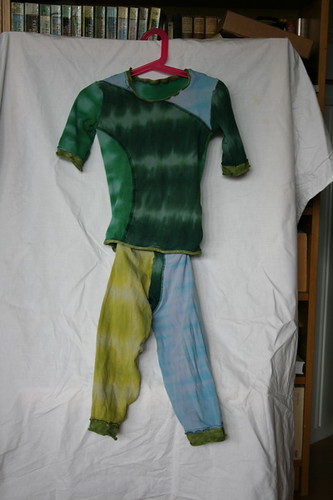 Another top I loved was too short as well. In fact, most tops are too short on me, I’ve got a dispropornately long torso. This one has a lovely deep blue hue that is really flattering on me, so I was loath to discard it. I had another top in the same sort of material in a greyish hue with a flower print, which was also, you guessed it, too short. I cut a band from the bottom of that and inserted it into the other, and, hey presto, useable top: 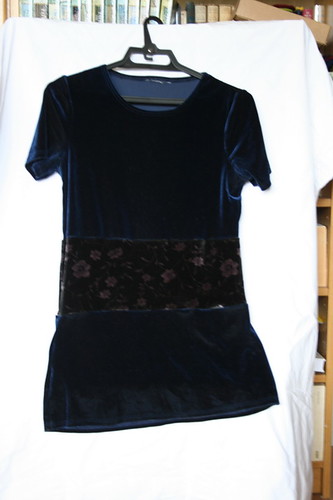 Detail showing the pattern on the insert: 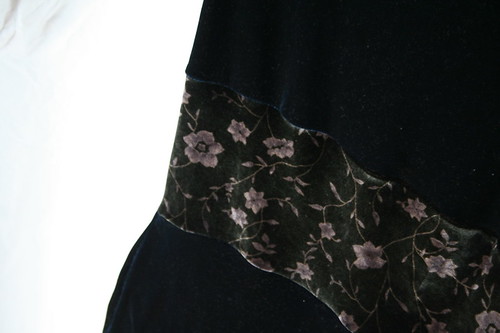 Attempt at capturing the blue hue. Excuse the dust: 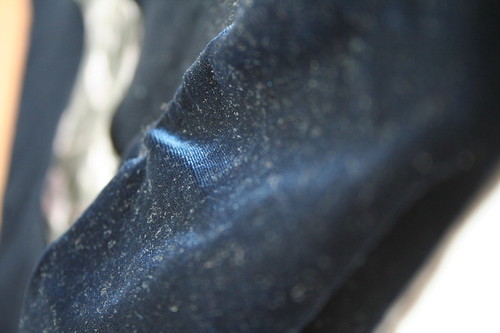 Spring has sprung and the lass needs some lightweight hats. I dug through the pile of “want to use this for something” and found one of my favourite t-shirts ever. I absolutely adore this material. However, the top has always been too short for me, and repeated spin cycles have not helped.

So. I cut off the bottom part to make a simple hat, here is the rest of the tee (I forgot the “before” picture): 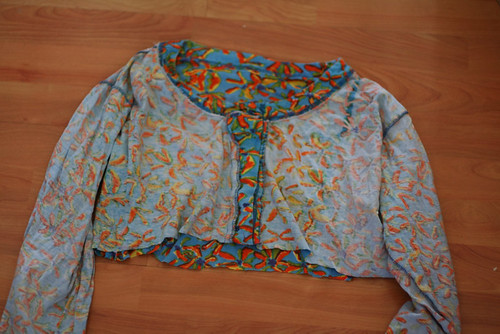 I made a tube out of several rectangles, folded it double and closed the end where the cut sides were with a seam – making a “peak” or ear-shape at each end. Voilla, new floppy-silly hat: 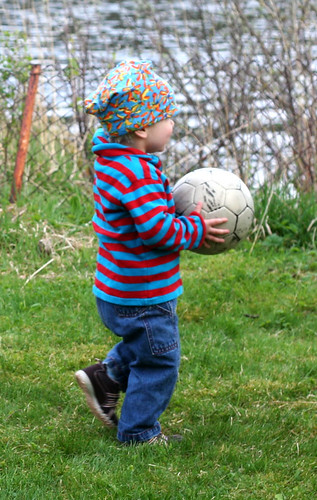 Despite being way too busy, I did find time for some quick sewing this weekend. The lass has decided one really needs a “dress” (skirt or dress will both do) for dancing, and so I thought I’d increase our store of everyday finery. I copied the dress-pattern from Børnetøy du selv kan sy some time last year, and now was finally the time to try it out. The outer fabric is a piece of an old duvet cover that I got in a swap, it was juuust big enough, and it’s lined with new – but fairtrade – pale blue cotton. The buttons are thrifted, the bias tape from a stash I purchased on sale. 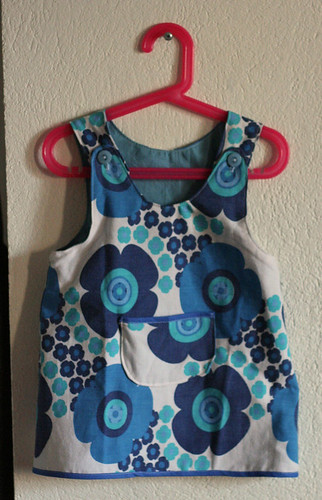 The skirt is made from four matching fat quarters I purchased this autumn intending them for a skirt. The pattern I made up as I went. 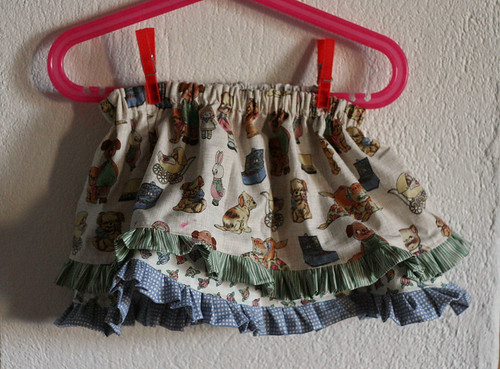