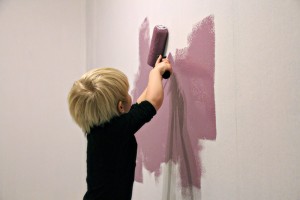 Uhm. Well, things took a turn for the better at the shop. We had picked out a nice, bright pink, and I’d gone to stand in line to get it mixed while the lass and the husband wandered a bit, and then the lass came running over. She’d found a new colour swatch. And she wanted that colour instead. Was she sure? Of course she was. And I wasn’t about to protest.

It turned out the shade she had found was not available in the paint type we wanted (Jotun Sense – we could have had it in Butinox Green Room, but I used the Butinox in our bedroom and on the doors and found the coverage to be appalling. I ended up with five coats on some of the doors!), however it was a little dark anyway, so a slightly lighter version of the same shade was settled on before the lass had time to change her mind.

The original colour was “5786 Lavendel”. And here I was going to link to the Butinox Green Room colours, but no such luck, there doesn’t seem to be a web page for it. Is it just me or is that a little strange? Aaaaanyway, its not really lavender, more aubergine (eggplant), though not quite as dark as that. And the code for the one we ended up with is 4030-R50B. It’s less pink in person than it looks in the picture, and also darker (it dries darker, that is).

The lass insists on calling it pink, however. She also exclaims how beautiful her wall is. I have to agree, it’s a nice colour. I’m quite happy to be able to call it purple, though.

One thought to “Painting the “pink” wall”