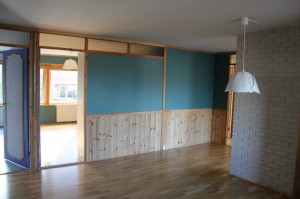 I was the hesitant one, would you belive it, but only because I have this wild idea that it would be possible to seat a bucketload of people around a long table if we could utilise the space along there. The husband chimed in with a very reasonable “So you want to base the whole layout of the flat on the one occasion where we might want to seat 30 people?” And I had to conceed that he is quite right, it would be madness not to use this space for bookshelves.

However, since the majority of our books are less than 20 cm wide, I suggested that, as a sort of compomise, it would be best if we could get shelves that are only 20 cm deep – as opposed to the 30 cm that seem to be standard. This, however, is easier said than done. IKEA has one model with 24 cm deep shelves, but that doesn’t come with enough shelves so you end up with wasted space in the other direction. We could go down the custom built route, but how easy (or difficult) is that going to be?

Well, the godawful paneling has to go first, so we have some time to think about it…