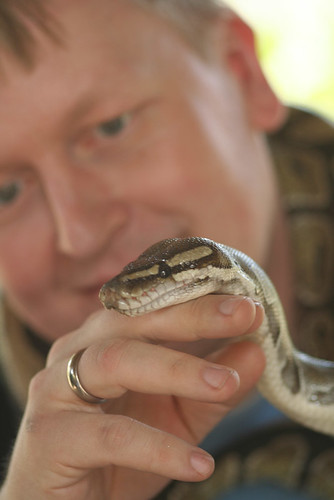 My father wanted to go to Gunjur and our driver, Sera (probably the best driver in The Gambia, if you’re ever going get in touch and I’ll give you his phone number), insisted on stopping off at the Gambian Reptile Farm (not that he had to insist much, “Would you like to see some reptiles?” “Yes, please!”).

The farm is run by a “mad dutchman”, and entrance is free for Gambians, and as good as free for tourists, though we pay for the upkeep apparently. Most Gambians are afraid of all reptiles and can’t tell the harmless ones from the dangerous ones. This is a problem in several ways, partly it means the poor reptiles are killed in droves, quite uneccessarily, but another consequence is that local “medicine men” can exploit people’s ignorance. Their website – www.gambianreptiles.bizhosting.com/ – will tell you more if you’re interested.

We were shown round by a young chap named Bakary Camara, who was very informative. The other people in our group were from one of the Baltic states and seemed to be as wary of snakes as the average Gambian. I’m sure they must have thought us all hopping mad. We were fawning over the snakes – as you do – telling them (in Norwegian, but I imagine the tone of voice was expressive enough) what pretty things they were. And when, at the end, we were allowed to hold two pythons, we were falling over each other to get at them.

But I mean, look at it? Isn’t it just the most gorgeous thing? (The Husband is good looking, too, obviously, but you don’t need to admire him too much, in fact, it’s better if you don’t, he’s taken.)