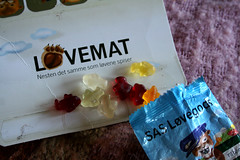 Or so they say. All I know is willful ignorance in others makes me annoyed and peevish. As when we travelled by plane over easter and the baby (I really should stop calling her the baby, she isn’t anymore, she’s grown into a little lady with a mind of her own, but as I don’t want to use her name on the internet much, I need a new nickname, I know:) the little lass got a “kid’s package” from the hostesses at SAS.

This consisted of a box vaguely decorated to resemble a plane, oval windows down the sides and a plane front window at one end where you could see the pilots and so on, populated by lions. On the box lid the text reads: “Løvemat. Nesten det samme som løvene spiser.” (Lion food. Almost the same as what lions eat.)

The contents: One tiny carton of orange juice, one bag of fruit jellies shaped like small airplanes, one set of colouring pencils and one colouring book – the latter also populated by lions.

The question: Which of these items supposedly resembles something a lion would eat?

Why couldn’t they have called the concept “Monkey food” instead and populated the plane with monkeys? That would at least have been half-way plausible.

I know, I know. Hardly a big thing in the great scheme of things. It’s just that it’s so unnecessary. And it kind of falls into the same category as a lot of the spelling mistakes that make me cringe. People, when this sort of mistake is pointed out, say “But it’s not important. Everyone understands what we are trying to say.” I beg to differ. Some people might actually not understand. And it IS important. I’m probably going to be one of those mothers who write to the television companies and point out the basic mistakes they make in children’s programmes. I nearly did the other day, in fact. There was a song about an explorer where they had illustrated one of the poles with pictures of both polar bears and penguins – which probably explains why I can’t remember which pole they were singing about. In the case of the SAS lions, I doubt whether any of the design team actually believe that lions eat fruit jellies shaped like little airplanes. When it comes to the polar fauna, I’m not so sure the misinformation is willful. After all, a recent survey shows that 13 percent of adult Norwegians believe there are polar bears in the region known as “Nord-Norge” – Northern Norway. In case you’re wondering, no, there are no polar bears in Nord-Norge. At Svalbard, yes, but that is another matter entirely. Mind you, since we’ve all grown up with the “for illustration only” weather map of Norway – with Svalbard floating off the west coast of northern Norway – perhaps most people believe it’s just a skip and a jump across the North Sea from the mainland to our northerly neighbour. It ain’t. 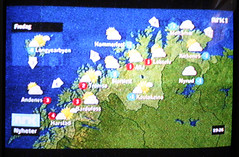 Anyway, why do I think all this is important? Well, apart from being pedantic and just instinctively disliking willful ignorance to the point of agressiveness (seriously, around me it pays to at least pretend to be interested in factual accuracy), I honestly believe this is a symptom of what got the human race into trouble in the first place. If it’s not particularly important to know what a lion eats, it follows that you’re not really interested in how the lion fits into the ecosystem and if you don’t know that, then you won’t be able to see any reason why we need lions in the first place, hence it doesn’t really matter if they become extinct. And if lions don’t really matter to you – they live in Africa, after all (oh, and a very small population in India, remnant of the subspecies Panthera leo persica which once covered most of Asia – did you know that?), and Africa is a far way off (though not quite so far if you run an airline, I should have thought, but never mind), then I suppose you don’t really mind if the whole continent of Africa becomes deforrestated, either? I mean, it won’t affect you, will it?

And so on. Not incidentally, I’ve been overdosing on Gerald Durrell lately, but I read Durrell because I believe in much of the same principles he believed in, not the other way around.

To add insult to injury, the lions were butt ugly, imho.

Oh, and the colouring pencils? Worst ever. Pressing down hard I could barely make a mark in the colouring book, the lass, having grasped the main idea of writing implements but not having had much time to practice and lacking in precision and force stood no chance at all.

2 thoughts to “Ignorance is bliss”