I apologise for the recent long silence, life happened.

Anyway, this summer we’re going back to Islay. Our last trip there did not go quite according to plan, so I’m hoping for some better luck this time. And I have no intention of being pregnant on Islay again, either.

This time round we’re actually organising a trip for some of the members of NMWL Trondheim, so we’ll be a group of about ten people for the first week. Then a few of us, not including the husband and the lass, are going via Campbelltown and Arran before hitting the mainland. After that, well, our little family still has about two weeks to fill, how much whisky is involved will depend on whether we have a tail of NMWL-members or not. Odds as it looks right now is not.

Anyway, plans for the week on Islay include vip-tours where possible and in any case a visit to every distillery. Personally I’m most looking forward to Ardbeg, since the day we were supposed to take a tour of Ardbeg in 2006 was the day I spent in hospital trying not to bleed. We will stop to see the Kildalton Cross, again, of course, and we’ll be sure to have lunch in the Old Kiln Cafe.

We’re also hoping for a proper tour of Kilchoman, last time they didn’t even have real whisky yet, and we only had time to see the shop. We’re also trying to wrangle some extra special tours or tastings out of some of our contacts, but I’m not going to reveal just what…

In 2006 our best tours were at Bowmore and at Caol Ila. At Bowmore we’d booked a VIP tour and when we arrived were told the destillery manager was regrettably not there, but the head brewer would show us round instead, and did we mind much? Did we mind? You’re kidding, right? Someone who’s most likely worked there for years and who is directly involved in production? Yeah, we’ll take it. It’s the most thorough tour I’ve ever had – we spent more time in the maltings and kiln than the Japanese bussload who arrived at the same time as us spent on their whole tour and tasting. It was also the tour where I regretted not being able to drink the most, as there were a fair few cask samples pulled in the warehouse, all of them quite stunning. Ah, well.

At Caol Ila we actually did the standard tour, but our guide was one of the men who’d been involved in rebuilding the distillery in 1973/4. He knew the place like the back of his hand and gave a marvelously engaged tour.

No doubt we’re in for some grand tours this summer, too. I’m salivating at the thought, and my notebook’s at the ready. The husband and I will have to take turns sitting the tours out, though, as the lass is coming along. Luckily throwing stones off a pier is one of her favourite activities (as it seems to be for most kids), so she’s unlikely to be bored. We may have to sneak in some nature spotting as well. On the 2006 trip I found the most impressive beetles in London, but Scotland has plenty of creepy-crawlies of its own, and a fair few bigger animals, too. Like sheep. When you’re three, sheep are exiting enough.

Once we’re back on the mainland, as mentioned, it’ll probably turn into more of a family vacation than a peat-freak’s dream. We’re planning on visiting Bladnoch, but also to spend some time in Wigtown‘s bookshops (yeah, I know. Me? Bookshops? You’re shocked, right?), which the lass should enjoy (her mother seems to have a fairly limitless budget when it comes to children’s books. Can’t imagine why. We’re then heading north towards Talisker, Skye and Balmacara, where we have friends we’re hoping to spend a few days with and then on to Aberdeen, lovely Aberdeen, for possibly a day or two of shopping before flying home.

Along the way we’re looking for interesting activities that all three of us might enjoy. Any tips would be welcome. So far we’re considering the Jacobite railway (the lass and me, the husband to drive the hire car the same stretch), seal tours in Oban or from Skye and the Satrosphere Science Centre in Aberdeen, where I was once supposed to go with Linda, but our plans were sabotaged by a terrific lunch with a few pints of cider at The Tilted Wig and never made it in time. Ahem.

Well, back to the planned trip: I can hardly wait.

More pictures from the 2006 trip can be found on Flickr. 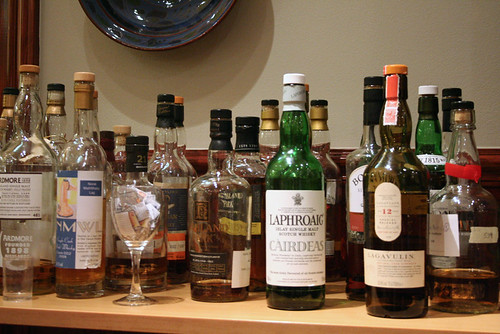 NMWL Annual Meeting. Followed by a round Islay with a map tasting, rather a lot of whisky, that is.